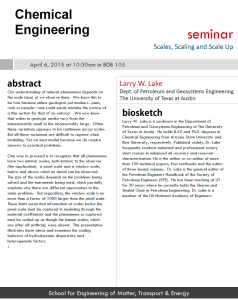 Scales, Scaling and Scale Up

Abstract
Our understanding of natural phenomena depends on the scale (size) at we observe them. We know this to be true because unless geologists put markers—pens, rods or people—one could easily mistake the picture of a thin section for that of an outcrop. We now know that scales in geologic media vary from the immeasurably small to the inconceivably large. Often these variations appears to be continuous across scales. But all these variations are difficult to capture when modeling. Yet we must model because we do require answers to practical problems.

One way to proceed is to recognize that all phenomena have two intrinsic scales, both intrinsic to the observer (the application): a pixel scale and a window scale, below and above which no detail can be observed. The size of the scales depends on the problems being solved and the instruments being used, which partially explains why there are different approaches to the same problem. But regardless, the window scale is no more than a factor of 1000 larger than the pixel scale. These limits mean that information at scales below the pixel scale must be captured in modeling through the material coefficients and the phenomena so captured must be scaled up as though the human scales, which are after all artificial, were absent. This presentation illustrates these ideas and examines the scaling behavior of hydrodynamic dispersivity and heterogeneity factors.

Biosketch
Larry W. Lake is a professor in the Department of Petroleum and Geosystems Engineering at The University of Texas at Austin. He holds B.S.E and Ph.D. degrees in chemical engineering from Arizona State University and Rice University, respectively. Published widely, Lake frequently conducts industrial and professional society short courses in enhanced oil recovery and reservoir characterization. He is the author or co-author of more than 100 technical papers, four textbooks and the editor of three bound volumes. Lake is the general editor of the Petroleum Engineers Handbook of the Society of Petroleum Engineers (SPE). He has been teaching at UT for 30 years where he currently holds the Sharon and Shahid Chair in Petroleum Engineering. Lake is a member of the National Academy of Engineering.