Seminar: A robust approach to quantification of margin and uncertainty, April 3 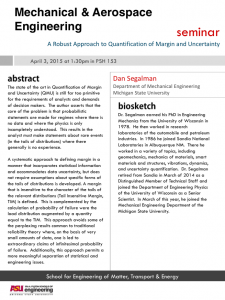 Abstract:
The state of the art in Quantification of Margin and Uncertainty (QMU) is still far too primitive for the requirements of analysts and demands of decision makers. The author asserts that the core of the problem is that probabilistic statements are made for regimes where there is no data and where the physics is only incompletely understood. This results in the analyst must make statements about rare events (in the tails of distributions) where there generally is no experience.

A systematic approach to defining margin in a manner that incorporates statistical information and accommodates data uncertainty, but does not require assumptions about specific forms of the tails of distributions is developed. A margin that is insensitive to the character of the tails of the relevant distributions (Tail Insensitive Margin, TIM) is defined. This is complemented by the calculation of probability of failure were the load distribution augmented by a quantity equal to the TIM. This approach avoids some of the perplexing results common to traditional reliability theory where, on the basis of very small amounts of data, one is led to extraordinary claims of infinitesimal probability of failure. Additionally, this approach permits a more meaningful separation of statistical and engineering issues.

Biosketch:
Segalman earned his PhD in Engineering Mechanics from the University of Wisconsin in 1978. He then worked in research laboratories of the automobile and petroleum industries. In 1986 he joined Sandia National Laboratories in Albuquerque NM. There he worked in a variety of topics, including geomechanics, mechanics of materials, smart materials and structures, vibrations, dynamics, and uncertainty quantification. Segalman retired from Sandia in March of 2014 as a Distinguished Member of Technical Staff and joined the Department of Engineering Physics of the University of Wisconsin as a Senior Scientist. In March of this year, he joined the Mechanical Engineering Department of the Michigan State University.

If you would like to meet with Segalman while he is on campus, contact Durella O’Donnell at Durella.ODonnell@asu.edu.