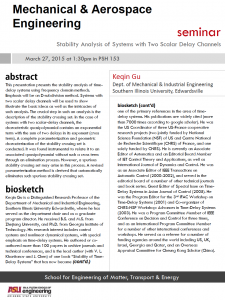 Abstract
This presentation presents the stability analysis of time-delay systems using frequency domain methods. Emphasis will be on D-subdivision method. Systems with two scalar delay channels will be used to show illustrate the basic ideas as well as the intricacies of such analysis. The crucial step in such an analysis is the description of the stability crossing set. In the case of systems with two scalar-delay channels, the characteristic quasipolynomial contains an exponential term with the sum of two delays in its exponent (cross term). A complete parameterization and geometric characterization of the stability crossing set is conducted. It was found instrumental to relate it to an associated quasipolynomial without such a cross term through an elimination process. However, a spurious stability crossing set may arise in this process. A revised parameterization method is derived that automatically eliminates such spurious stability crossing set.

Biography
Keqin Gu is a Distinguished Research Professor of the Department of Mechanical and Industrial Engineering, Southern Illinois University Edwardsville, where he has served as the department chair and as a graduate program director. He received B.S. and M.S. from Zhejiang University, and Ph.D. from Georgia Institute of Technology. His research interest includes control systems and nonlinear dynamical systems, with special emphasis on time-delay systems. He authored or co-authored more than 100 papers in archive journals and technical conferences, and is the lead author (with V. L. Kharitonov and J. Chen) of one book “Stability of Time-Delay Systems” that has now become one of the primary references in the area of time-delay systems. His publications are widely cited (more than 7000 times according to google scholar). He was the US Coordinator of three US-France cooperative research projects (two jointly funded by National Science Foundation (NSF) of US and Centre National de Recherche Scientifique (CNRS) of France, and one solely funded by CNRS). He is currently an Associate Editor of Automatica and an Editorial Board Member of IET Control Theory and Applications, as well as International Journal of Dynamics and Control. He was as an Associate Editor of IEEE Transactions on Automatic Control (2000-2002), and served in the editorial board of a number of other technical journals and book series. Guest Editor of Special Issue on Time-Delay Systems in Asian Journal of Control (2005). He was the Program Editor for the 3rd IFAC Workshop on Time-Delay Systems (2001) and Co-organizer of CNRS-NSF Workshop: Advances in Time-Delay Systems (2003). He was a Program Committee Member of IEEE Conference on Decision and Control for three times, and as an International Program Committee Member for a number of other international conferences and workshops. He served as a referee for a number of funding agencies around the world including US, UK, Israel, Georgia and Qatar, and an Overseas Appraisal Committee for Cheung Kong Scholar (China).