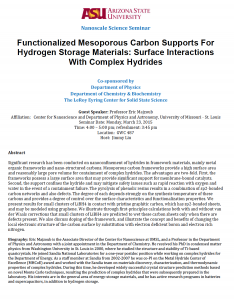 Abstract
Significant research has been conducted on nanoconfinement of hydrides in framework materials, mainly metal organic frameworks and nano‐structured carbons. Mesoporous carbon frameworks provide a high surface area and reasonably large pore volume for containment of complex hydrides. The advantages are two‐fold. First, the frameworks possess a large surface area that may provide significant support for membrane‐bound catalysts. Second, the support confines the hydride and may mitigate safety issues such as rapid reaction with oxygen and water in the event of a containment failure. The pyrolysis of phenolic resins results in a combination of sp2‐bonded carbon networks and also defects. The degree of each depends strongly on the synthesis temperature of these carbons and provides a degree of control over the surface characteristics and functionalization properties. Majzoub presents results for small clusters of LiBH4 in contact with pristine graphitic carbon, which has sp2‐bonded sheets, and may be modeled using graphene. Majzoub illustrates through first‐principles calculations both with and without van der Waals corrections that small clusters of LiBH4 are predicted to wet these carbon sheets only when there are defects present. Majzoub also discusses doping of the framework, and illustrate the concept and benefits of changing the local electronic structure of the carbon surface by substitution with electron deficient boron and electron rich nitrogen.

Eric Majzoub is the Associate Director of the Center for Nanoscience at UMSL, and a Professor in the Department of Physics and Astronomy with a joint appointment in the Department of Chemistry. He received his PhD in condensed matter physics from Washington University in St. Louis in 2000, where he studied the structure and stability of Ti‐based quasicrystals. He joined Sandia National Laboratories for a one‐year postdoc position while working on complex hydrides for the Department of Energy. As a staff member at Sandia from 2002‐2007 he was co‐PI on the Metal Hydride Center of Excellence (MHCoE) award and worked with the Sandia team on materials discovery, characterization, and thermodynamic properties of complex hydrides. During this time, he developed widely successful crystal structure prediction methods based on novel Monte Carlo techniques, resulting the prediction of complex hydrides that were subsequently prepared in the laboratory. His interests are in the general area of energy‐storage materials, and he has active research programs in batteries and supercapacitors, in addition to hydrogen storage.