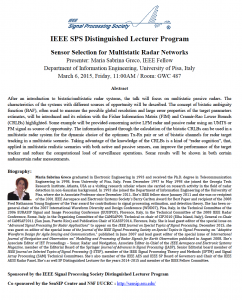 Abstract
After an introduction to bistatic/multistatic radar systems, the talk will focus on multistatic passive radars. The characteristics of the systems with different sources of opportunity will be described. The concept of bistatic ambiguity function (BAF), often used to measure the possible global resolution and large error properties of the target parameters estimates, will be introduced and its relation with the Fisher Information Matrix (FIM) and Cramér-Rao Lower Bounds (CRLBs) highlighted. Some example will be provided concerning active LFM radar and passive radar using an UMTS or FM signal as source of opportunity. The information gained through the calculation of the bistatic CRLBs can be used in a multistatic radar system for the dynamic choice of the optimum Tx-Rx pair or set of bistatic channels for radar target tracking in a multistatic scenario. Taking advantage of the knowledge of the CRLBs is a kind of “radar cognition”, that, applied in multistatic realistic scenarios with both active and passive sensors, can improve the performance of the target tracker and reduce the computational load of surveillance operations. Some results will be shown in both certain anduncertain radar measurements.

Biography
Maria Sabrina Greco graduated in Electronic Engineering in 1993 and received the Ph.D. degree in Telecommunication Engineering in 1998, from University of Pisa, Italy. From December 1997 to May 1998 she joined the Georgia Tech Research Institute, Atlanta, USA as a visiting research scholar where she carried on research activity in the field of radar detection in non-Gaussian background. In 1993 she joined the Department of Information Engineering of the University of Pisa, where she is Associate Professor since December 2011. She’s IEEE fellow since January 2011 and she was co-recipient of the 2001 IEEE Aerospace and Electronic Systems Society’s Barry Carlton Award for Best Paper and recipient of the 2008 Fred Nathanson Young Engineer of the Year award for contributions to signal processing, estimation, and detection theory. She has been co-general-chair of the 2007 International Waveform Diversity and Design Conference (WDD07), Pisa, Italy, in the Technical Committee of the 2006 EURASIP Signal and Image Processing Conference (EUSIPCO), Florence, Italy, in the Technical Committee of the 2008 IEEE Radar Conference, Rome, Italy, in the Organizing Committee of the CAMSAP09, Technical co-chair of CIP2010 (Elba Island, Italy), General co-Chair of CAMSAP2011 (San Juan, Puerto Rico) and Publication Chair of ICASSP2014, Florence, Italy. She is lead guest editor of the special issue on “Advanced Signal Processing for Radar Applications” to appear on the IEEE Journal on Special Topics of Signal Processing, December 2015, she was guest co-editor of the special issue of the Journal of the IEEE Signal Processing Society on Special Topics in Signal Processing on “Adaptive Waveform Design for Agile Sensing and Communication,” published in June 2007 and lead guest editor of the special issue of International Journal of Navigation and Observation on” Modelling and Processing of Radar Signals for Earth Observation published in August 2008. She’s Associate Editor of IET Proceedings – Sonar, Radar and Navigation, Associate Editor-in-Chief of the IEEE Aerospace and Electronic Systems Magazine, member of the Editorial Board of the Springer Journal of Advances in Signal Processing (JASP), Senior Editorial board member of IEEE Journal on Selected Topics of Signal Processing (J-STSP), member of the IEEE Signal Processing Theory and Methods (SPTM) and Signal Array Processing (SAM) Technical Committees. She’s also member of the IEEE AES and IEEE SP Board of Governors and Chair of the IEEE AESS Radar Panel. She’s as well SP Distinguished Lecturer for the years 2014-2015 and member of the IEEE Fellow Committee.