Seminar: Manipulating Electro-magnetic Waves at the Nanoscale and Its Engineering Applications 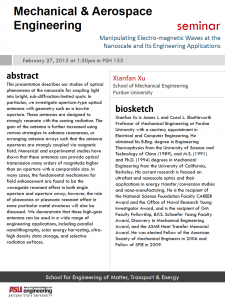 Manipulating Electro-magnetic Waves at the Nanoscale and Its Engineering Applications

Abstract
This presentation describes Xu’s studies of optical phenomena at the nanoscale for coupling light into bright, sub-diffraction-limited spots. In particular, Xu and his team investigate aperture-type optical antennas with geometry such as a bowtie aperture. These antennas are designed to strongly resonate with the coming radiation. The gain of the antenna is further increased using various strategies to enhance resonances, or arranging antenna arrays such that the antenna apertures are strongly coupled via magnetic field. Numerical and experimental studies have shown that these antennas can provide optical transmission many orders of magnitude higher than an aperture with a comparable size. In many cases, the fundamental mechanisms for field enhancement are found to be the waveguide resonant effect in both single aperture and aperture array; however, the role of plasmonics or plasmonic resonant effect in some particular metal structures will also be discussed. The team demonstrates that these high-gain antennas can be used in a wide range of engineering applications, including parallel nanolithography, solar energy harvesting, ultra-high density data storage, and selective radiation surfaces.

Biosketch
Xianfan Xu is James J. and Carol L. Shuttleworth Professor of Mechanical Engineering at Purdue University with a courtesy appointment in Electrical and Computer Engineering. He obtained his B.Eng. degree in Engineering Thermophysics from the University of Science and Technology of China (1989), and M.S. (1991) and Ph.D. (1994) degrees in Mechanical Engineering from the University of California, Berkeley. His current research is focused on ultrafast and nanoscale optics and their applications in energy transfer/conversion studies and nano-manufacturing. He is the recipient of the National Science Foundation Faculty CAREER Award and the Office of Naval Research Young Investigator Award, and is the recipient of GM Faculty Fellowship, B.F.S. Schaefer Young Faculty Award, Discovery in Mechanical Engineering Award, and the ASME Heat Transfer Memorial Award. He was elected Fellow of the American Society of Mechanical Engineers in 2006 and Fellow of SPIE in 2009.