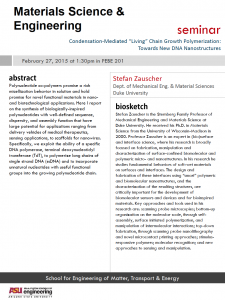 Abstract
Polynucleotide co-polymers promise a rich micellization behavior in solution and hold promise for novel functional materials in nano- and biotechnological applications. Here Zauscher will report on the synthesis of biologically-inspired polynucleotides with well-defined sequence, dispersity, and assembly function that have large potential for applications ranging from delivery vehicles of medical therapeutics, sensing applications, to scaffolds for nanowires. Specifically, Zauscher and team exploit the ability of a specific DNA polymerase, terminal deoxynucleotidyl transferase (TdT), to polymerize long chains of single strand DNA (ssDNA) and to incorporate unnatural nucleotides with useful functional groups into the growing polynucleotide chain.

Biosketch
Stefan Zauscher is the Sternberg Family Professor of Mechanical Engineering and Materials Science at Duke University. He received his Ph.D. in Materials Science from the University of Wisconsin-Madison in 2000. Professor Zauscher is an expert in (bio)surface and interface science, where his research is broadly focused on fabrication, manipulation and characterization of surface-confined biomolecular and polymeric micro- and nanostructures. In his research he studies fundamental behaviors of soft-wet materials on surfaces and interfaces. The design and fabrication of these interfaces using “smart” polymeric and biomolecular nanostructures, and the characterization of the resulting structures, are critically important for the development of biomolecular sensors and devices and for bioinspired materials. Key approaches and tools used in his research are: scanning probe microscopies; bottom-up organization on the molecular scale, through self-assembly, surface initiated polymerization, and manipulation of intermolecular interactions; top-down fabrication, through scanning probe nanolithography and novel microcontact printing approaches; stimulus-responsive polymers; molecular recognition; and new approaches to sensing and manipulation.