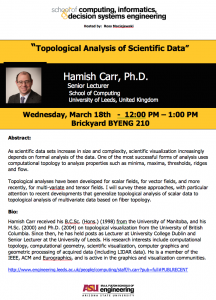 Abstract
As scientific data sets increase in size and complexity, scientific visualization increasingly depends on formal analysis of the data. One of the most successful forms of analysis uses computational topology to analyze properties such as minima, maxima, thresholds, ridges and flow.

Biosketch
Hamish Carr received his B.C.Sc. (Hons.) (1998) from the University of Manitoba, and his M.Sc. (2000) and Ph.D. (2004) on topological visualization from the University of British Columbia. Since then, he has held posts as Lecturer at University College Dublin and Senior Lecturer at the University of Leeds. His research interests include computational topology, computational geometry, scientific visualization, computer graphics and geometric processing of acquired data (including LIDAR data). He is a member of the IEEE, ACM and Eurographics, and is active in the graphics and visualization communities.
http://www.engineering.leeds.ac.uk/people/computing/staff/h.carr?pub=full#PUBLRECENT