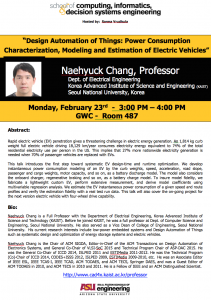 Abstract
Rapid electric vehicle (EV) penetration gives a threatening challenge in electric energy generation. An 1,814 kg curb weight full electric vehicle driving 18,129 km/year consumes electricity energy equivalent to 74% of the total residential electricity use per person in the US. This implies that 27% more nationwide electricity generation is needed when 70% of passenger vehicles are replaced with EVs.

This talk introduces the first step toward systematic EV design-time and runtime optimization. Chang and his team develop instantaneous power consumption modeling of an EV by the curb weights, speed, acceleration, road slope, passenger and cargo weights, motor capacity, and so on, as a battery discharge model. The model also considers the onboard charger, regenerative braking and so on, as a battery charge model. To insure model fidelity, Chang and his team fabricate a lightweight custom EV, perform extensive measurement, and derive model coefficients using multivariable regression analysis. They estimate the EV instantaneous power consumption of a given speed and route profiles and verify the estimation fidelity with a real test run data. This talk will also cover the on-going project for the next version electric vehicle with four-wheel drive capability.

Biosketch
Naehyuck Chang is a Full Professor with the Department of Electrical Engineering, Korea Advanced Institute of Science and Technology (KAIST). Before he joined KAIST, he was a full professor at Dept. of Computer Science and Engineering, Seoul National University. He also served as a Vice Dean of College of Engineering, Seoul National University.  His current research interests include low-power embedded systems and Design Automation of Things such as systematic design and optimization of energy storage systems and electric vehicles.