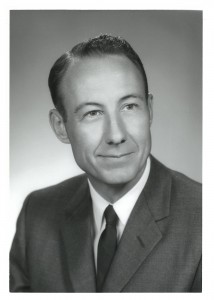 Hewitt Hartley Young passed away peacefully at age 91, on Monday, February 2, 2015. Professor emeritus of Industrial Engineering at ASU, and former department chair, Hewitt was a leader, a true intellect who made noteworthy contributions to his university and profession, as well as to family, friends, employers, and
country.

He was a beloved husband, brother, father, grandfather, great grandfather, and uncle. He had a great smile and was a demonstrated man of character who always found a way to convey kindness and cheerfulness. The elder of two children born to Herbert Robinson Young and the former Ruth Hartley in Willoughby, Ohio, on May 16, 1923, Hewitt moved with his family to Cleveland Heights, Ohio, where his father was an Associate Professor of English at Case School of Applied Science (now Case School of Engineering); his mother was an elementary school teacher. As a boy Hewitt was an excellent student but also enjoyed baseball and tennis; he was a fan of the Cleveland Indians. He was also proficient on both piano and violin.

Hewitt attended Cleveland Heights High School and excelled in academics, including math and science, while playing varsity tennis. He graduated with honors from Case in Mechanical Engineering in August 1944, where he had enrolled in the V-12 Navy Reserve unit during WWII. Following graduation, he attended the US Naval Academy in Annapolis for V-7 midshipmen, where he completed the rigorous 90-day “wonder” training program and was awarded an ensign’s commission. He served a total of 31 months of active satisfactory service, including assignments on the USS La Salle (AP-102) transport ship and the USS Brennan (DE-13) Evarts-class destroyer escort.

While stationed in Miami Beach, Florida, he married Beatrice Hynes on June 8, 1945.

He retired from ASU in 1988 and pursued many interests, including music; he was a violinist for the Scottsdale Symphony Orchestra for many years.