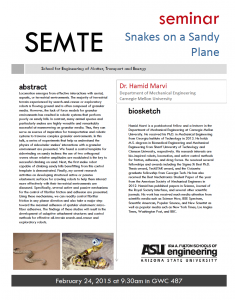 Snakes on a Sandy Plane

Abstract
Locomotion emerges from effective interactions with aerial, aquatic, or terrestrial environments. The majority of terrestrial terrain experienced by search-and-rescue or exploratory robots is flowing ground and is often composed of granular media. However, the lack of force models for granular environments has resulted in robotic systems that perform poorly on sandy hills. In contrast, many animal species and particularly snakes are highly versatile and remarkably successful at maneuvering on granular media. Thus, they can serve as sources of inspiration for transportation and robotic systems to traverse complex granular environments. In this talk, a series of experiments that help us understand the physics of sidewinder snakes’ interactions with a granular environment are presented. We found a control template for sidewinding on sandy inclines: the use of two orthogonal waves whose relative amplitudes are modulated is the key to successful climbing on sand. Next, the first snake robot capable of climbing sandy hills benefitting from this control template is demonstrated. Finally, my current research activities on developing structured active or passive elastomeric surfaces for crawling robots to help them interact more effectively with their terrestrial environments are discussed. Specifically, several active and passive mechanisms for the control of fibrillar friction and adhesion are presented. Using these mechanisms, we can readily control fibrillar friction in any planar direction and also take a major step toward the maximal adhesion of spatular elastomeric microfiber adhesives. The findings of these studies will result in the development of adaptive attachment structures and control methods for effective all-terrain search-and-rescue and exploratory robots.

Biosketch
Hamid Marvi is a postdoctoral fellow and a lecturer in the Department of Mechanical Engineering at Carnegie Mellon University. He received his Ph.D. in Mechanical Engineering from Georgia Institute of Technology in 2013. He holds M.S. degrees in Biomedical Engineering and Mechanical Engineering from Sharif University of Technology and Clemson University, respectively. His research interests are bio-inspired robots, locomotion, and active control methods for friction, adhesion, and drag forces. He received several fellowships and awards including the Sigma Xi Best Ph.D. Thesis award, TechSTAR award, and the Goizueta graduate fellowship from Georgia Tech. He has also received the Best Mechatronics Student Paper of the year from the American Society of Mechanical Engineers in 2012. Hamid has published papers in Science, Journal of the Royal Society Interface, and several other scientific journals. His work has received much media attention from scientific media such as Science Now, IEEE Spectrum, Scientific American, Popular Science, and New Scientist as well as popular media such as New York Times, Los Angeles Times, Washington Post, and BBC.