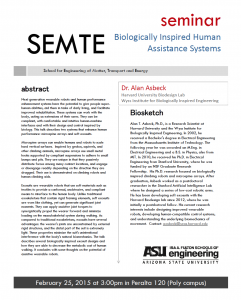 Abstract
Next generation wearable robots and human performance enhancement systems have the potential to give people superhuman abilities, aid them in tasks of daily living, and facilitate improved rehabilitation. These systems can work with the body, acting as extensions of their users. They can be compliant, with comfortable and intuitive human-machine interfaces and with their design and control inspired by biology. This talk describes two systems that enhance human performance: microspine arrays and soft exosuits.

Microspine arrays can enable humans and robots to scale hard vertical surfaces. Inspired by geckos, squirrels, and other climbing animals, microspine arrays use small metal hooks supported by compliant suspensions to adhere to small bumps and pits. They are unique in that they passively distribute forces among many contact locations, and engage or disengage readily depending on the direction they are dragged. Their use is demonstrated on climbing robots and human climbing aids.

Exosuits are wearable robots that use soft materials such as textiles to provide a conformal, unobtrusive, and compliant means to interface to the human body. Unlike traditional exoskeletons that contain rigid framing elements, soft exosuitsare worn like clothing, yet can generate significant joint moments. They can apply assistive joint torques to synergistically propel the wearer forward and minimize loading on the musculoskeletal system during walking. As
compared to traditional exoskeletons, exosuits have several advantages: the wearer’s joints are unconstrained by externalrigid structures, and the distal part of the suit is extremely light. These properties minimize the suit’s unintentional interference with the body’s natural biomechanics. The talk describes several biologically inspired exosuit designs and how they are able to decrease the metabolic cost of human walking. It concludes with some thoughts on the potential of assistive wearable robots.

Biosketch
Alan T. Asbeck, Ph.D., is a Research Scientist at Harvard University and the Wyss Institute for Biologically Inspired Engineering. In 2002, he received a Bachelor’s degree in Electrical Engineering from the Massachusetts Institute of Technology. The following year he was awarded an M.Eng. inElectrical Engineering and a B.S. in Physics, also from MIT. In 2010, he received his Ph.D. in Electrical Engineering from Stanford University, where he was funded by an NSF Graduate Research Fellowship. His Ph.D. research focused on biologically inspired climbing robots and microspine arrays. After graduation, Asbeck worked as a postdoctoral researcher in the Stanford Artificial Intelligence Lab where he designed a series of low-cost robotic arms. He has been developing soft exosuits with the Harvard Biodesign lab since 2012, where he was initially a postdoctoral fellow. His current research interests include designing improved wearable robots, developing human-compatible control systems, and understanding the underlying biomechanics of movement. Contact:  aasbeck@seas.harvard.edu