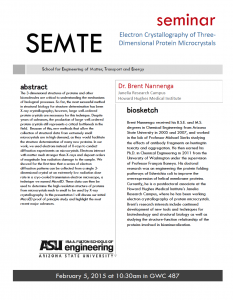 Abstract
The 3-dimensional structures of proteins and other biomolecules are critical to understanding the mechanisms of biological processes. So far, the most successful method in structural biology for structure determination has been X-ray crystallography; however, large well-ordered protein crystals are necessary for this technique. Despite years of advances, the production of large well-ordered protein crystals still represents a critical bottleneck in the field. Because of this, new methods that allow the collection of structural data from extremely small microcrystals are in high demand, as they would facilitate the structure determination of many new proteins. In their work, they used electrons instead of X-rays to conduct diffraction experiments on microcrystals. Electrons interact with matter much stronger than X-rays and deposit orders of magnitude less radiation damage to the sample. They showed for the first time that a series of electron diffraction patterns can be collected from a single 3-dimensional crystal at an extremely low radiation dose rate in a cryo-cooled transmission electron microscope, a technique they named MicroED. These data can then be used to determine the high-resolution structure of proteins from microcrystals much to small to be used by X-ray crystallography. In this presentation  Nannenga will discuss their initial MicroED proof of principle study and highlight the most recent major advances.

Biosketch
Brent Nannenga received his B.S.E. and M.S. degrees in Chemical Engineering from Arizona State University in 2005 and 2007, and worked in the lab of Professor Michael Sierks studying the effects of antibody fragments on huntingtin toxicity and aggregation. He then earned his Ph.D. in Chemical Engineering in 2011 from the University of Washington under the supervision of Professor François Baneyx. His doctoral research was on engineering the protein folding
pathways of Esherichia coli to improve the overexpression of helical membrane proteins. Currently, he is a postdoctoral associate at the Howard Hughes Medical Institute’s Janelia Research Campus, where he has been working electron crystallography of protein microcrystals. Brent’s research interests include continued development of new tools and techniques for biotechnology and structural biology as well as studying the structure-function relationship of the
proteins involved in biomineralization.