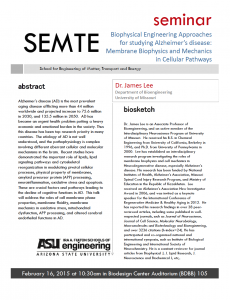 Abstract
Alzheimer’s disease (AD) is the most prevalent aging disease afflicting more than 44 million worldwide and projected increase to 75.6 million in 2030, and 135.5 million in 2050. AD has become an urgent health problem putting a heavy economic and emotional burden in the society. Thus this disease has been top research priority in many countries. The etiology of AD is not well understood, and the pathophysiology is complex involving different aberrant cellular and molecular mechanisms in the brain. Recent studies have demonstrated the important role of lipids, lipid signaling pathways and cytoskeletal reorganization in modulating pivotal cellular processes, physical property of membranes, amyloid precursor protein (APP) processing, neuroinflammation, oxidative stress and apoptosis. These are crucial factors and pathways leading to the decline of cognitive functions in AD. This talk will address the roles of cell membrane phase properties, membrane fluidity, membrane mechanics in oxidative stress, mitochondrial dysfunction, APP processing, and altered cerebral endothelial functions in AD.

Biosketch
Dr. James Lee is an Associate Professor of Bioengineering, and an active member of the Interdisciplinary Neuroscience Program at University of Missouri. He received his B.S. in Chemical Engineering from University of California, Berkeley in 1996, and Ph.D. from University of Pennsylvania in 2000. Lee has established an interdisciplinary research program investigating the roles of membrane biophysics and cell mechanics in Neurodegenerative disease, especially Alzheimer’s disease. His research has been funded by National Institutes of Health, Alzheimer’s Association, Missouri Spinal Cord Injury Research Program, and Ministry of Education in the Republic of Kazakhstan. Lee received an Alzheimer’s Association New Investigator Award in 2006, and was invited as a keynote speaker for the International Conference of Regenerative Medicine & Healthy Aging in 2012. He has reported his research findings in over 38 peer reviewed articles, including some published in well respected journals, such as Journal of Neuroscience, Journal of Cell Science, Molecular Neurobiology,
Macromolecules and Biotechnology and Bioengineering, and over 3236 citations (h-index=24). He has participated and co-organized national and international symposia, such as Institute of Biological Engineering and International Society of Neurochemistry. He is a constant reviewer for journal articles from Biophysical J, J. Lipid Research, J. Neuroscience and Biochemical J, etc,.