Seminar – Towards the Advancement of Physical Human‐Robot Interaction and Robot‐Aided Neurorehabilitation, Jan. 23 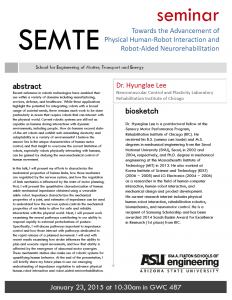 Abstract
Recent advances in robotic technologies have enabled their use within a variety of domains including manufacturing, services, defense, and healthcare. While these applications highlight the potential for integrating robots with a broad range of societal needs, there remains much work to be done particularly in areas that require robots that can interact with the physical world. Current robotic systems are still not as capable as humans during interactions with dynamic environments, including people. How do humans exceed state-of-the-art robots and exhibit such astonishing dexterity and adaptability in a variety of environments? Lee believes the answer lies in the unique characteristics of human motor control, and that insight to overcome the current limitation of robots, especially robots physically interacting with humans, can be gained by studying the neuromechanical control of human movement.

In this talk, Lee will present my efforts to characterize the mechanical properties of human limbs, how those mechanics are regulated by the nervous system, and how the regulation of limb mechanics is influenced by the state of motor planning. First, he will present the quantitative characterization of human ankle mechanical impedance obtained using a wearable ankle robot. Impedance characterizes the mechanical properties of a joint, and estimates of impedance can be used to understand how the nervous system controls the mechanical properties of our limbs to allow for safe and reliable interactions with the physical world. Next, he will present work examining the neural pathways contributing to our ability to respond rapidly to external perturbations of posture. Specifically, Lee will discuss pathways important to impedance control and how those interact with pathways dedicated to the rapid release of a planned movement. Lee will end with recent results examining how stroke influences the ability to plan and execute rapid movements, and how that ability is affected by the emergence of abnormal motor synergies. These mechanistic studies also make use of robotic systems for quantifying human behavior. At the end of the presentation, he will briefly share my future plans to use our emerging understanding of impedance regulation to advance physical human-robot interaction and robot-aided neurorehabilitation.

Biosketch
Dr. Hyunglae Lee is a postdoctoral fellow at the Sensory Motor Performance Program, Rehabilitation Institute of Chicago (RIC). He received his B.S. (summa cum laude) and M.S. degrees in mechanical engineering from the Seoul National University (SNU), Seoul, in 2002 and 2004, respectively, and Ph.D. degree in mechanical engineering at the Massachusetts Institute of Technology (MIT) in 2013. He also worked at Korea Institute of Science and Technology (KIST) (2006 ~ 2008) and LG Electronics (2004 ~ 2006) as a researcher in the field of human-computer interaction, human-robot interaction, and mechanical design and product development. His current research interest includes physical human-robot interaction, rehabilitation robotics, biomechanics, and neuromotor control. He is a recipient of Samsung Scholarship and has been awarded 2014 Sarah Baskin Award for Excellence in Research (1st place) from RIC.