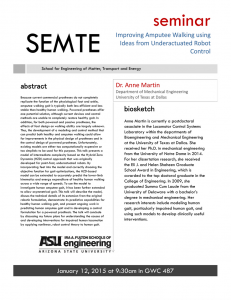 Abstract
Because current commercial prostheses do not completely replicate the function of the physiological foot and ankle, amputee walking gait is typically both less efficient and less stable than healthy human walking. Powered prostheses offer one potential solution, although current devices and control methods are unable to completely restore healthy gait. In addition, for both powered and passive prostheses, the effects of foot design on walking ability are largely unknown.

Thus, the development of a modeling and control method that can predict both healthy and amputee walking could allow for improvements in the physical design of prostheses and in the control design of powered prostheses. Unfortunately,existing models are either too computationally expensive or too simplistic to be used for this purpose. This talk presents a model of intermediate complexity based on the Hybrid Zero Dynamics (HZD) control approach that was originally developed for point-foot, underactuated robots. By incorporating feet into the model and correctly choosing the objective function for gait optimizations, the HZD-based model can be extended to accurately predict the lower-limb kinematics and energy expenditure of healthy human walking across a wide range of speeds. To use the model to investigate human amputee gait, it has been further extended to allow asymmetrical gait.

Martin will describe the model, discuss the technical details of its extension from the original robotic formulation, demonstrate its predictive capabilities for healthy human walking gait, and present ongoing work in predicting human amputee gait and in developing a control formulation for a powered prosthesis. Martin will conclude by discussing her future plans for understanding the causes of and developing interventions for impaired human locomotion by applying nonlinear, robot control theory to human gait.

Biosketch
Anne Martin is currently a postdoctoral associate in the Locomotor Control Systems Laboratory within the departments of Bioengineering and Mechanical Engineering at the University of Texas at Dallas. She received her Ph.D. in mechanical engineering from the University of Notre Dame in 2014. For her dissertation research, she received the Eli J. and Helen Shaheen Graduate School Award in Engineering, which is awarded to the top doctoral graduate in the College of Engineering. In 2009, she graduated Summa Cum Laude from the University of Delaware with a bachelor’s degree in mechanical engineering. Her research interests include modeling human gait, particularly impaired human gait and using such models to develop clinically useful interventions.