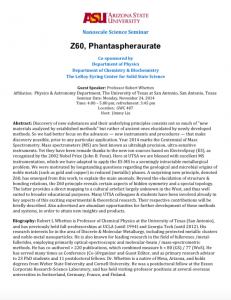 Abstract: Discovery of new substances and their underlying principles consists not so much of “new materials analyzed by established methods” but rather of ancient ones elucidated by newly developed methods. So we had better focus on the advances — new instruments and procedures — that make discovery possible, prior to any particular application. Year 2014 marks the Centennial of Mass Spectrometry. Mass spectrometers (MS) are best known as ultrahigh precision, ultra-sensitive instruments. Yet they have been remade thanks to the new ion sources based on ElectroSpray (ES), as recognized by the 2002 Nobel Prize (John B. Fenn). Here at UTSA we are blessed with excellent MS instrumentation, which we have adapted to apply the ES-MS to a seemingly intractable metallurgical problem. We were motivated by longstanding questions regarding the geological and microbial origins of noble metals (such as gold and copper) in reduced (metallic) phases. A surprising new principle, denoted Z60, has emerged from this work, to explain the main anomaly. Beyond the elucidation of structure & bonding relations, the Z60 principle reveals certain aspects of hidden symmetry and a special topology. The latter provides a direct mapping to a cultural artefact largely unknown in the West, and thus well suited to broader educational purposes. Many UTSA colleagues & students have been involved already in key aspects of this exciting experimental & theoretical research. Their respective contributions will be briefly described. Also advertised are abundant opportunities for further development of these methods and systems, in order to attain new insights and products.

Biography: Robert L. Whetten is Professor of Chemical Physics at the University of Texas (San Antonio), and has previously held full-professorships at UCLA (until 1994) and Georgia Tech (until 2012). His research interests lie in the area of Discrete & Molecular Metallurgy, including protected metallic clusters and noble-metal nanoparticles. He is also known for leading research in the field of fullerenes /metal-fullerides, employing primarily optical-spectroscopic and molecular-beam / mass-spectrometric methods. He has co-authored > 220 publications, which combined measure h = 80 (GS) / 77 (WoS). He has served many times as Conference (Co-)Organizer and Guest Editor, and as primary research advisor to 23 PhD students and 11 postdoctoral fellows. Whetten is a native of Mesa, Arizona, and holds degrees from Weber State University and Cornell University. He was a postdoctoral fellow at the Exxon Corporate Research-Science Laboratory, and has held visiting-professor positions at several overseas universities in Switzerland, Germany, France, and Finland.