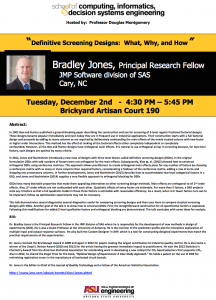 Abstract
In 1961 Box and Hunter published a ground-breaking paper describing the construction and use for screening of 2-level regular fractional factorial designs. These designs became popular immediately and even today they are in frequent use in industrial applications. Their construction starts with a full factorial design and proceeds by adding as many columns as are required by deliberately confounding the main effects of the newly created column with two-factor or higher order interactions. This method has the effect of making all the factorial effects either completely independent or completely confounded. However, all the Box and Hunter designs have orthogonal main effects. It is natural to use orthogonal arrays in screening because, for two-level factors, such designs are optimal by many criteria.

In 2011, Jones and Nachtsheim introduced a new class of designs with three level factors called definitive screening designs (DSDs). In the original formulation DSDs with odd numbers of factors were not orthogonal for the main effects. Subsequently, Xiao et. al. (2012) showed how to construct orthogonal DSDs using conference matrices. This approach allows practitioners to create orthogonal main effects plans for any number of factors by choosing a conference matrix with as many or more columns than required factors, concatenating a foldover of the conference matrix, adding a row of zeros and dropping any unnecessary columns. In further developments, Jones and Nachtsheim (2013) describe how to accommodate two-level categorical factors in a DSD, and Jones and Nachtsheim (2014) supplies a very flexible approach to orthogonal blocking for DSDs

DSDs have many desirable properties that make them appealing alternatives to other screening design methods. Main effects are orthogonal to all 2nd order effects. Also, 2nd order effects are not confounded with each other. Quadratic effects of every factor are estimable. For more than 5 factors, a DSD projects onto any 3 factors so that a full quadratic model in those three factors is estimable with reasonable efficiency. As a result, when 3 or fewer factors turn out to be important, follow up optimization experiments may not be necessary.

This talk demonstrates several diagnostics several diagnostics useful for comparing screening designs and then uses them to compare classical screening designs with DSDs. Another goal of the talk is to show how to construct DSDs. First, the straightforward construction for all quantitative factors is explained. Following this modifications for added 2-level qualitative factors and orthogonal blocking are demonstrated. The talk concludes with some ideas for analysis.

Bio
Bradley Jones is the principal research fellow in the JMP division of SAS where he is responsible for the development of new methods in design of experiments (DOE). He is also a guest professor at the University of Antwerp. He is the inventor of the prediction profile plot for interactive exploration of multiple input and output response surfaces. He also built the Custom Designer in JMP, which is a tool for constructing designed experiments that match the practical requirements of the experimenter.

Jones received the Brumbaugh Award in 2009 and again in 2012 for papers making the largest contribution to industrial quality control. He is also twice a winner of the Lloyd S. Nelson Award (2010 and 2012) for the article having the greatest immediate impact to practitioners. He won the 2012 Statistics in Chemistry Award from the American Statistical Association for outstanding work in developing a new catalyst for CO2 based polymers that sequester CO2. Also in 2012, he shared the Ziegel Prize for the book, “Optimal Design of Experiments: A Case Study Approach.” He holds a patent on the use of DOE for minimizing registration errors in the manufacture of laminated circuit boards.

Jones is the Editor-in-Chief of the Journal of Quality Technology and a Fellow of the American Statistical Association.