Seminar – Broad Data: Challenges on the emerging Web of data 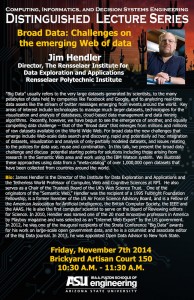 Abstract:
“Big Data” usually refers to the very large datasets generated by scientists, to the many petabytes of data held by companies like Facebook and Google, and to analyzing real-time data assets like the stream of twitter messages emerging from events around the world.  Key areas of interest include technologies to manage much larger datasets, technologies for the visualization and analysis of databases, cloud-based data management and data mining algorithms.  Recently, however, Hendler has begun to see the emergence of another, and equally compelling data challenge — that of the “Broad data” that emerges from millions and millions of raw datasets available on the World Wide Web. For broad data the new challenges that emerge include Web-scale data search and discovery, rapid and potentially ad hoc integration of datasets, visualization and analysis of only-partially modeled datasets, and issues relating to the policies for data use, reuse and combination.  In this talk, Hendler will present the broad data challenge and discuss  potential starting points for solutions including those arising from research in the Semantic Web area and work using the IBM Watson system.  He illustrates these approaches using data from a “meta-catalog” of over 1,000,000 open datasets that have been collected from countries around the world.

Bio:
James Hendler is the Director of the Institute for Data Exploration and Applications and the Tetherless World Professor of Computer, Web and Cognitive Sciences at RPI.  He also serves as a Chair of the Trustees Board of the UK’s Web Science Trust.   One of the originators of the “Semantic Web,” Hendler was the recipient of a 1995 Fulbright Foundation Fellowship, is a former member of the US Air Force Science Advisory Board, and is a Fellow of the American Association for Artificial Intelligence, the British Computer Society, the IEEE and the AAAS. He is also the first computer scientist to serve on the Board of Reviewing editors for Science. In 2010, Hendler was named one of the 20 most innovative professors in America by Playboy magazine and was selected as an “Internet Web Expert” by the US government. In 2012, he was one of the inaugural recipients of the Strata Conference “Big Data” awards for his work on large-scale open government data, and he is a columnist and associate editor of the Big Data journal. In 2013, he was appointed Open Data Advisor to New York State.