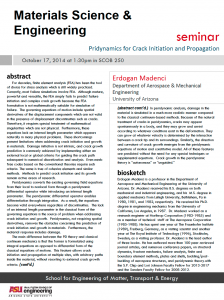 Abstract
For decades, finite element analysis (FEA) has been the tool of choice for stress analysis which is still widely practiced. Currently, most failure simulations involve FEA. Although mature, powerful and versatile, the FEA simply fails to predict failure initiation and complex crack growth because the FEA formulation is not mathematically suitable for simulation of failure. The governing equations of motion include spatial derivatives of the displacement components which are not valid in the presence of displacement discontinuities such as cracks. Therefore, it requires special treatment of mathematical singularities which are not physical. Furthermore, these equations lack an internal length parameter which appears naturally in many physical problems. These shortcomings present limitations when addressing crack initiation and growth in materials. Damage initiation is not intrinsic, and crack growth prediction is commonly achieved by implementing either an external local or global criteria for guiding the crack path subsequent to numerical discretization and analysis. Even mesh-free codes based on the conventional theories require such criteria. The same is true of cohesive elements and similar methods. Methods to predict crack initiation and its growth remain active areas of research.

Peridynamics converts the existing governing field equations from their local to nonlocal form through a peridynamic differential operator while introducing an internal length parameter. The peridynamic differential operator enables differentiation through integration. As a result, the equations become valid everywhere regardless of discontinuities. The lack of an internal length parameter in the classical form of the governing equations is the source of problem when addressing crack initiation and growth. Peridynamics, not requiring spatial derivatives, removes the obstacles concerning the prediction of crack initiation and growth in materials. Furthermore, the material response includes damage.

The main difference between the PD theory and classical continuum mechanics is that the former is formulated using integral equations as opposed to differential form of the classical equations of motions. This feature allows crack initiation and propagation at multiple sites, with arbitrary paths inside the material, without resorting to external crack growth criteria. In peridynamic analysis, damage in the material is simulated in a much more realistic manner compared to the classical continuum-based methods. Because of the natural treatment of cracks in peridynamics, cracks may appear spontaneously in a body, and they may grow and arrest according to whatever conditions exist in the deformation. They can grow at whatever velocity is determined by the interaction between a crack tip and its surroundings. Similarly, the direction and curvature of crack growth emerges from the peridynamic equations of motion and constitutive model. All of these features are predicted without the need for any special techniques or supplemental equations. Crack growth in the peridynamic theory is “autonomous” or “unguided.”

Bio
Erdogan Madenci is a professor in the Department of Aerospace and Mechanical Engineering at the University of Arizona. Madenci received his B.S. degrees on both mechanical and industrial engineering, and his M.S. degree in applied mechanics from Lehigh University in 1980, 1981, and 1982, respectively. He received his Ph.D. degree in engineering mechanics from the University of California, Los Angeles, in 1987. Madenci worked as a research engineer at Northrop Corporation (1983-1985) and as a member of technical staff at The Aerospace Corporation (1985-1988). He has spent one year at The Fraunhofer Institute (1989), Freiburg, Germany, as a visiting scientist and another year at The Royal Institute of Technology (1996), Stockholm, Sweden, as a visiting professor. He is the lead author of three books, and has authored more than 100 peer-reviewed journal articles, and numerous conference papers, on structural dynamics, fracture mechanics, failure analysis, finite and boundary element methods, plates and shells, buckling/post-buckling of aerospace structures, and peridynamic theory.