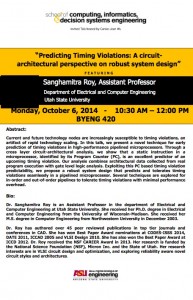 Roy has authored over 45 peer reviewed publications in top tier journals and conferences in CAD. She has won Best Paper Award nominations at CODES-ISSS 2014, DATE 2011, ICCAD 2005 and VLSI Design 2010. She has also won the Best Paper Award at ICCD 2012. Roy received the NSF CAREER Award in 2013. Her research is funded by the National Science Foundation (NSF), Micron Inc. and the State of Utah. Her research interests are in VLSI circuit design and optimization, and exploring reliability aware novel circuit styles and architectures.