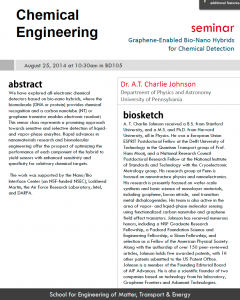 abstract
We have explored all-electronic chemical detectors based on bio-nano hybrids, where the biomolecule (DNA or protein) provides chemical recognition and a carbon nanotube (NT) or graphene transistor enables electronic readout. This sensor class represents a promising approach towards sensitive and selective detection of liquid- and vapor-phase anayltes. Rapid advances in nanomaterials research and biomolecular engineering offer the prospect of optimizing the performance of each component of the hybrid to yield sensors with enhanced sensitivity and specificity for arbitrary chemical targets.

The work was supported by the Nano/Bio Interface Center (an NSF-funded NSEC), Lockheed Martin, the Air Force Research Laboratory, Intel and DARPA.

biosketch
A. T. Charlie Johnson received a B.S. from Stanford University, and a M.S. and Ph.D. from Harvard University, all in Physics. He was a European Union ESPRIT Postdoctoral Fellow at the Delft University of Technology in the Quantum Transport group of Prof. Hans Mooij, and a National Research Council Postdoctoral Research Fellow at the National Institute of Standards and Technology with the Cryoelectronic Metrology group. His research group at Penn is focused on nanostructure physics and nanoelectronics. His research is presently focused on wafer-scale synthesis and basic science of monolayer materials, including graphene, boron nitride, and transition metal dichalcogenides. His team is also active in the area of vapor- and liquid-phase molecular sensing using functionalized carbon nanotube and graphene field effect transistors. Johnson has received numerous honors, including a NSF Graduate Research Fellowship, a Packard Foundation Science and Engineering Fellowship, a Sloan Fellowship, and selection as a Fellow of the American Physical Society. Along with the authorship of over 150 peer-reviewed articles, Johnson holds five awarded patents, with 18 other patents submitted to the US Patent Office. Johnson is a member of the Founding Editorial Board of AIP Advances. He is also a scientific founder of two companies based on technology from his laboratory, Graphene Frontiers and Adamant Technologies.