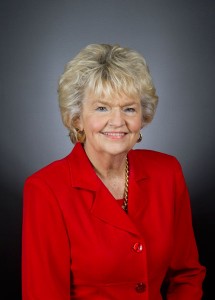 Mary Anderson-Rowland, an associate professor in the School of Computing, Informatics, and Decision Systems Engineering recently received the President’s Award from the Women in Engineering ProActive Network (WEPAN) at the organization’s national Change Leader Forum.

Mary Anderson-Rowland has been honored for significant contributions to the leading organization for promoting the success of diverse communities of women in engineering by transforming work force and education cultures.

Anderson-Rowland is an associate professor in the School of Computing, Informatics, and Decision Systems Engineering. She is also a leader of ASU’s Motivated Engineering Transfer Students (METS) center, which works to recruit students to transfer to ASU from community colleges and other schools, and provides programs and services to keep them in college.

She recently received the President’s Award from the Women in Engineering ProActive Network (WEPAN) at the organization’s national Change Leader Forum.

The award recognizes her longtime commitment to WEPAN and its members. The award announcement described her as “truly passionate about advancing women in engineering and computer science, especially community college transfers.”

WEPAN cited Anderson-Rowland’s development in the past 12 years of a model academic success and professional development program for transfer and Native American undergraduate and graduate students — with a focus on females and students who are underrepresented in engineering.

Scholarship students aided by her program have a graduation rate of more than 95 percent, and half of the graduates have gone to graduate school.

Anderson-Rowland is a charter member of WEPAN. She was a member of its national board of directors for two years and served on the group’s national conference committee for seven years, chairing the conference proceedings in 2006 and 2007.

WEPAN has grown to almost 900 members from 140 engineering schools, as well as corporations, government agencies and not-for-profit organizations.

Anderson-Rowland is also a Fellow of the American Society of Engineering Education (ASEE), and was recently recognized by the organization as a pioneer in engineering education for her research and other work in the area.

Among her other achievements on a national scale: