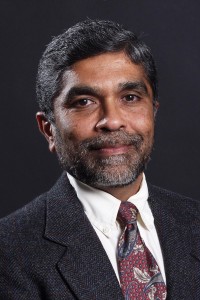 Vijay Vittal, a professor in the School of Electrical, Computer and Energy Engineering, has been invited to join the Electric Power Research Institute’s Advisory Council.

Vijay Vittal, the Ira A. Fulton Chair Professor in the School of Electrical, Computer and Energy Engineering, has been invited to join the Electric Power Research Institute’s Advisory Council.

Vittal is the director of ASU’s Power Systems Engineering Research Center and a senior sustainability scientist in ASU’s Julie Ann Wrigley Global Institute of Sustainability. He was appointed to a four-year term on the 32-member Council.

The Electric Power Research Institute is an independent, nonprofit company that conducts research, development and demonstration relating to the generation, delivery and use of electricity for the benefit of the public.

Vittal has a doctorate in electrical engineering from Iowa State University, a master’s degree from the Indian Institute of Technology in Kanpur, and a bachelor’s degree from the College of Engineering in Bangalore, India. His areas of research include electric power, power system dynamics and controls, nonlinear systems, computer applications in power, sustainable energy, modeling and simulation of complex systems.

ASU’s Power Systems Engineering Research Center, which Vittal leads, is a consortium of 13 universities and more than 45 companies. It conducts research in three primary areas: markets, systems, and transmission and distribution technologies.

Vittal also was editor-in-chief of IEEE Transactions on Power Systems, and has published numerous refereed articles, nine books and book chapters and 13 research and technical reports. He is a member of the National Academy of Engineering.

Prior to joining ASU in 2005, he was an Anston Marston Distinguished Professor and a Murray and Ruth Harpole Professor at Iowa State University, where he was the director of that university’s Electric Power Research Center. He also was site director of the NSF/IUCRC Power System Engineering Research Center and served as the program director of power systems for the NSF Division of Electrical and Communication Systems in Washington, D.C.