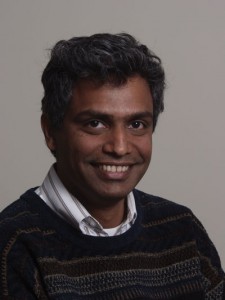 Subbarao “Rao” Kambhampati, a professor in the School of Computing, Informatics and Decision Systems Engineering, has been elected president-elect of the Association for the Advancement of Artificial Intelligence.

Subbarao “Rao” Kambhampati, a professor in the School of Computing, Informatics and Decision Systems Engineering, has been elected the president-elect of the Association for the Advancement of Artificial Intelligence. He will serve as president-elect for 2014-2016 and as president for 2016-2018.

The international association is the premier nonprofit scientific society working to increase understanding of intelligent behavior and its underlying thought process, and how that is used in machines. It works to increase public understanding of artificial intelligence as well as promote research in the field and its responsible use.

Kambhampati has a bachelor’s degree in electrical engineering from the Indian Institute of Technology, Madras, and a master’s and doctorate in computer science from the University of Maryland, College Park.

He is the recipient of a 1992 NSF Research Initiation Award, a 1994 NSF young investigator award, a 2001-2002 College of Engineering teaching excellence award, a 2011 ASU Last Lecture citation, a 2004 IBM Faculty Award and three Google Research Awards.

Kambhampati also serves on the Board of Trustees of the International Joint Conference on Artificial Intelligence and will be the program chair for the flagship AI conference in 2016.