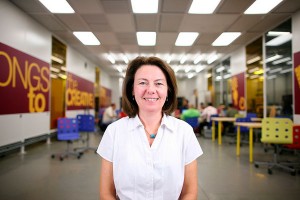 Ann McKenna has been named the director of the sixth school within the Ira A. Fulton Schools of Engineering. She has served as professor and chair of the department of Engineering and Computing Systems at the College of Technology and Innovation since 2012.

“We are excited to welcome Ann to the Fulton Schools as school director on ASU’s Polytechnic campus,” said Paul Johnson, dean of the Ira A. Fulton Schools of Engineering. “After an extensive search, Ann’s experience, her vision for the school, and the support she received from her colleagues proved to be a perfect combination of credentials for the role of school director.”

“I am honored to have the opportunity to lead the sixth school on ASU’s Polytechnic campus,” said McKenna. “The Fulton Schools are experiencing significant growth and our portfolio of program offerings is now one of the largest and most interdisciplinary in the country. I am excited to join the leadership team at the Fulton Schools as we continue to evolve and expand.”

Beyond her role as school director, McKenna’s scholarly research includes the cognitive and social processes of design; the role of adaptive expertise in design thinking and innovation; and the mechanisms and policies that influence the impact and diffusion of educational innovations. She has twice been the recipient of the ASEE best overall paper award (1998 and 2011), as well as the recipient of the outstanding paper award from the IEEE/ASEE Frontiers in Education (FIE) conference (1997). Her work in the area of design education has been nationally recognized by being a best paper finalist for three consecutive years, 2009, 2010, and 2011 in the Design in Engineering Education Division of ASEE (winning the award in 2011). McKenna works across the disciplinary lines of engineering, education and design and has published in diverse disciplinary venues including Science, the Journal of Engineering Education, IEEE Computer, ASME Journal of Mechanical Design, and Teaching in Higher Education.

Prior to joining ASU, McKenna served as a program officer for the National Science Foundation (NSF) in the Division of Undergraduate Education and was on the faculty in the Department of Mechanical Engineering and Segal Design Institute at Northwestern University. She currently serves as a Senior Associate Editor for the Journal of Engineering Education, the leading research journal in the field of engineering education.

McKenna earned a bachelor’s degree and master’s in mechanical engineering from Drexel University and a doctorate from the University of California at Berkeley.