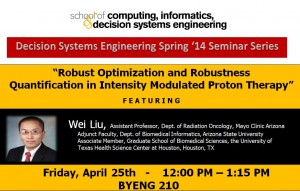 Bio
Wei Liu earned his Ph.D. from Princeton University in 2007. After working in The University of Texas MD Anderson Cancer Center for three years, Liu joined Department of Radiation Oncology of Mayo Clinic Arizona in July 2013 as an assistant professor. His research was mostly focused on the planning research in radiation therapy, especially in intensity-modulated proton therapy. In August 2012, he was awarded the NIH/NCI Career Award for his research in robust optimization in IMPT.