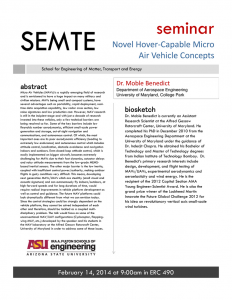 Abstract
Micro Air Vehicles (MAVs) is a rapidly emerging field of research and is envisioned to have a huge impact on many military and civilian missions. MAVs being small and compact systems, have several advantages such as portability, rapid deployment, real-time data acquisition capability, low radar cross section, low noise signatures and low production cost. However, MAV research is still in the incipient stage and with just a decade of research invested into these vehicles, only a few technical barriers are being resolved so far. Some of the key barriers include low Reynolds number aerodynamics, efficient small-scale power generation and storage, out-of-sight navigation and communications, and autonomous control. Of which, the most important ones are its poor aerodynamic efficiency (leading to extremely low endurance) and autonomous control which includes attitude control, localization, obstacle avoidance and navigation indoors and outdoors. Even closed-loop attitude control, which is easily implemented on bigger aircraft, becomes extremely challenging for MAVs due to their fast dynamics, actuator delays and noisy attitude measurements from the low-grade MEMS based inertial sensors. The other major barrier is the low inertia, coupled with insufficient control power/authority, making outdoor flights in gusty conditions very difficult. This means, developing next generation MAVs/UAVs which are stealthy (small visual and acoustic signature) and can autonomously fly indoors/outdoors, at high forward speeds and for long durations of time, would require radical improvements in vehicle platform development as well as control and guidance. The future MAV platforms could look dramatically different from what we can envision today. Since the control strategies could be strongly dependent on the vehicle platform, they cannot be solved independent of each other and therefore, should be tackled as a coupled multi-disciplinary problem. This seminar will focus on some of the unconventional MAV/UAV configurations (Cyclocopter, flapping-wing MAV, etc.,) developed by Benedict and his students in the MAV laboratory at the Alfred Gessow Rotorcraft Center, University of Maryland in order to address some of these issues.

Biosketch
Dr. Moble Benedict is currently an Assistant Research Scientist at the Alfred Gessow Rotorcraft Center, University of Maryland. He completed his Ph.D. in December 2010 from the Aerospace Engineering Department at the University of Maryland under the guidance of Dr. Inderjit Chopra. He obtained his Bachelor of Technology and Master of Technology degrees from Indian Institute of Technology Bombay. Benedict’s primary research interests include design, development, and flight testing of MAVs/UAVs, experimental aerodynamics and aeroelasticity and wind energy. He is the recipient of the 2012 Capital Section AIAA Young Engineer-Scientist Award. He is also the grand prize winner of the Lockheed Martin Innovate the Future Global Challenge 2012 for his idea on revolutionary vertical axis small-scale wind turbines.