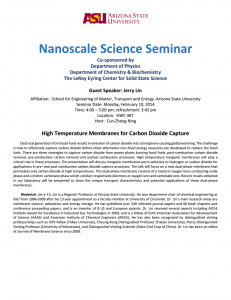 Biosketch
Jerry Y.S. Lin is a Regents’ Professor at Arizona State University. He was department chair of chemical engineering at ASU from 2006-2009 after his 13 year appointment as a faculty member at University of Cincinnati. Lin’s main research areas are membrane science, adsorption and energy storage. He has published over 240 refereed journal papers and 60 book chapters and conference proceeding papers, and is an inventor of 8 U.S. and European patents. Lin received several awards including AIChE Institute Award for Excellence in Industrial Gas Technologies in 2009, and is a fellow of both American Association for Advancement of Science (AAAS) and American Institute of Chemical Engineers (AIChE). He has also been recognized by distinguished visiting professorships such as JSPS fellow (Tokyo University), Cheung-Kong Distinguished Professor (Tianjin University), Piercy Distinguished Visiting Professor (University of Minnesota), and Distinguished Visiting Scientist (State Grid Corp of China). Lin has been an editor of Journal of Membrane Science since 2008.