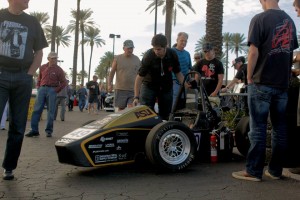 Members of the ASU student chapter of the Society of Automotive Engineers (SAE) recently displayed their prototype for a Formula One race car at the Scottsdale Pavilions Car Show.

It was their first effort to drum up interest – and support – for their endeavor to participate in the SAE Formula One competition in Michigan in May 2015 against student teams from universities around the world.

The weekly Scottsdale Pavilions Car Show is one of the longest-running auto shows in the Phoenix area, typically featuring more than 250 cars and motorcycles at each event.

To follow up on exhibiting its car at the show, the ASU team plans to organize a car wash and oil-change service in the near future to raise funds to go to the SAE Formula One competition.

The team is sponsored by the Bondurant School of High Performance Driving in Chandler, and hopes to organize a fundraising event that will offer people race car driving experiences at the Bondurant track.

The team is posting about the events and updates on their road to the competition on their Facebook page.

“We had a great time talking to fellow race car enthusiasts and letting youngsters sit in the car, and making a good impression on the local community on behalf of the Fulton Schools of Engineering,” Mamidi says. “We’re interested in participating in the auto show again.”