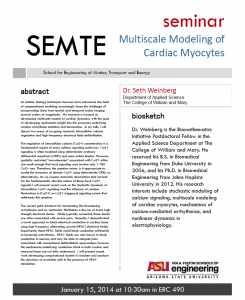 The regulation of intracellular calcium (Ca2+) concentration is a fundamental aspect of many cellular signaling pathways. Ca2+ signaling is often modeled using deterministic ordinary differential equations (ODEs) and mass-action kinetics. However, spatially restricted “microdomains” associated with Ca2+ influx are small enough that local signaling may involve only 1-100 Ca2+ ions. Therefore, the question arises: is it appropriate to model the dynamics of domain Ca2+ using deterministic ODEs or, alternatively, do we require stochastic descriptions that account for the fundamentally discrete nature of these local Ca2+ signals? Weinberg will present recent work on the stochastic dynamics of intracellular Ca2+ signaling and the influence of random fluctuations in [Ca2+] on Ca2+-triggered signaling events that addresses this question.

The current gold standard for terminating life-threatening arrhythmias such as ventricular fibrillation is the use of brief, high strength electrical shocks. While typically successful, these shocks are often associated with severe pain. Recently, Weinberg demonstrated a novel approach to block electrical conduction in cardiac tissue using high frequency alternating current (HFAC) electrical fields. Importantly, these HFAC fields could block conduction sufficiently to terminate arrhythmias. HFAC fields are also known to block conduction in neurons and may be able to mitigate pain associated with conventional defibrillation approaches; however the mechanisms underlying conduction block in both cardiac and neuronal tissue are not fully understood. He will present recent work developing computational models to simulate and analyze the dynamics of excitable cells in the presence of HFAC stimulation.

Biosketch
Seth Weinberg is the Biomathematics Initiative Postdoctoral Fellow in the Applied Science Department at The College of William and Mary. He received his B.S. in Biomedical Engineering from Duke University in 2006, and his Ph.D. in Biomedical Engineering from Johns Hopkins University in 2012. His research interests include stochastic modeling of calcium signaling, multiscale modeling of cardiac myocytes, mechanisms of calcium-mediated arrhythmias and nonlinear dynamics in
electrophysiology.