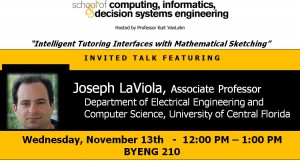 Abstract:
Using pen-and touch-based interfaces shows great potential for supporting interactive intelligent tutoring systems in a variety of different STEM disciplines. In STEM, communication of ideas is often performed with 2D languages (e.g., mathematical expressions, diagrams) and pen and touch input provide a natural means to enter this information into a computer because of the interface’s similarity to pen and paper. Mathematical sketching is an interaction paradigm that associates handwritten, recognized mathematics and drawings together to create animations and visualizations of STEM concepts that can be used as part of intelligent tutoring systems. In this talk, I will discuss recent work on mathematical sketching and present three different application prototypes that focus on understanding of elementary data structures in computer science and set proof problems in discrete mathematics as well as answer verification through animation in introductory physics courses.

Bio:
Joseph J. LaViola Jr. is the CAE Link Professor and associate professor in the Department of Electrical Engineering and Computer Science and directs the Interactive Systems and User Experience Lab at the University of Central Florida. He is also an adjunct associate research professor in the Computer Science Department at Brown University. His primary research interests include pen-based interactive computing, 3D spatial interfaces for video games, human-robot interaction, multimodal interaction in virtual environments, and user interface evaluation. His work has appeared in journals such as ACM TOCHI, IEEE PAMI, Presence, and IEEE Computer Graphics & Applications, and he has presented research at conferences including ACM SIGGRAPH, ACM CHI, IEEE Virtual Reality, and the ACM International Conference on Intelligent User Interfaces. He has also co-authored “3D User Interfaces: Theory and Practice,” the first comprehensive book on 3D user interfaces. In 2009, he won an NSF Career Award to conduct research on mathematical sketching. LaViola received a Sc.M. in Computer Science in 2000, a Sc.M. in Applied Mathematics in 2001, and a Ph.D. in Computer Science in 2005 from Brown University.