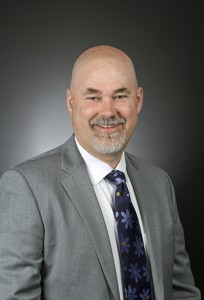 Daniel W. Bliss, an associate professor in the School of Electrical, Computer and Energy Engineering, interests in information theory, estimation theory and signal processing have broad applications to wireless communications, remote sensing and medical signal processing. In particular, his research focuses on extracting information in noisy and difficult situations.

A common theme across his work is the use of arrays of antennas and sensors to increase capacity, efficiency, and reliability. Examples of this theme include multiple-input, multiple-output (MIMO) communications and radar.

There are many ways that multiple antennas and sensors can work together and Bliss is exploring all of those, whether it is one radio with multiple antennas—a fairly traditional approach—to techniques done far less often such as estimating the channel and figuring the optimal way to combine the signal sent to each one of the transmitted antennas to maximize the information received.

In a common laptop computer, standard Wi-Fi uses multiple antennas but takes advantage of them only in a limited sense. It can’t deal with interference.

“When it tries to communicate, it listens,” Bliss explains. “If it hears anything, it doesn’t transmit. It is a reasonable approach but it means it is stopped by anything.”

Bliss’s research in wireless communications aims to fundamentally remove this constraint by enabling radio systems to operate in the presence of interference.  This robust communications enables significant improvements in communications performance and has implications at the level of a single link—that is the communications between two radios— and larger networks, affecting how multiple nodes can and should interact. 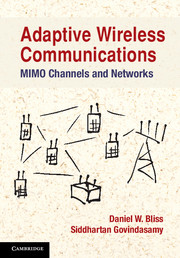 “Many of the techniques discussed in the book are not currently implemented in standard radio systems. We want to seek new ways to build robust communications using multiple-input, multiple-output techniques on a single link or across a network,” he says.

“When we estimate the position of a return, we can measure the relative path lengths from not just one position, but from a whole bunch of positions,” he says.

In addition to communications and remote sensing, Bliss applies signal-processing techniques to electrical activity of the brain measured via electroencephalography (EEG). One application is the prediction of epileptic seizures.

“We are looking for some changes in the brain in order to identify the precursor to the onset of an epileptic seizure. We are now able to predict the onset of the seizure with very high likelihood and a very low probability of making a mistake,” he explains.

Working with the University of Massachusetts Medical School, Bliss is also using a related signal processing approach that employs a range of sensing modalities to try to predict apnea in preterm infants.

“There are effective therapeutic treatments, but we need the ability to predict and initiate these techniques before the onset of a seizure or apnea,” he says.

Bliss joined ASU in 2012 from the Massachusetts Institute of Technology Lincoln Laboratory where he was a senior member of the technical staff in the Advanced Sensor Techniques group.

He went on to earn his master’s and doctoral degrees in physics from the University of California at San Diego.

During his career, Bliss has been principal investigator on over a dozen programs with applications in radio, radar and medical monitoring, attracting funding in excess of $20 million.

Links for more information on Bliss’s: