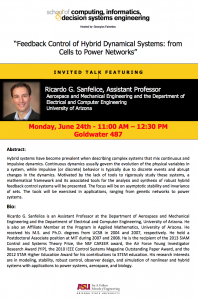 Abstract
Hybrid systems have become prevalent when describing complex systems that mix continuous and impulsive dynamics. Continuous dynamics usually govern the evolution of the physical variables in a system, while impulsive (or discrete) behavior is typically due to discrete events and abrupt changes in the dynamics. Motivated by the lack of tools to rigorously study these systems, a mathematical framework and its associated tools for the analysis and synthesis of robust hybrid feedback control systems will be presented. The focus will be on asymptotic stability and invariance of sets. The tools will be exercised in applications, ranging from genetic networks to power systems.

Bio
Ricardo G. Sanfelice is assistant professor at the departments of Aerospace and Mechanical Engineering and Electrical and Computer Engineering at the University of Arizona. He is also an affiliate member at the Program in Applied Mathematics, University of Arizona. He received his M.S. and Ph.D. degrees from UCSB in 2004 and 2007, respectively. He held a postdoctoral associate position at MIT during 2007 and 2008. He is the recipient of the 2013 SIAM Control and Systems Theory Prize, the NSF CAREER award, the Air Force Young Investigator Research Award (YIP), the 2010 IEEE Control Systems Magazine Outstanding Paper Award, and the 2012 STAR Higher Education Award for his contributions to STEM education. His research interests are in modeling, stability, robust control, observer design, and simulation of nonlinear and hybrid systems with applications to power systems, aerospace and biology.