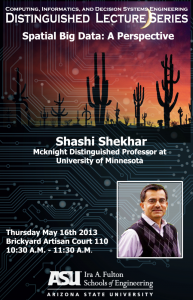 Shashi Shekhar is a McKnight Distinguished University Professor at the University of Minnesota (Computer Science faculty). For contributions to geographic information systems (GIS), spatial databases and spatial data mining, he received the IEEE-CS Technical Achievement Award and the was elected an IEEE Fellow as weel as an AAAS Fellow. He was also named a key difference-maker for the field of GIS by the most popular GIS textbook. He has a distinguished academic record that includes 260+ refereed papers, a popular textbook on Spatial Databases (Prentice Hall, 2003) and an authoritative Encyclopedia of GIS (Springer, 2008). Shekhar is serving as a member of the Computing Community Consortium Council (2012-2015), a co-Editor-in-Chief of Geo-Informatica: An International Journal on Advances in Computer Sciences for GIS (Springer), a series editor for the Springer-Briefs on GIS, and as a program co-chair for the International Conference on Geographic Information Science (2012). Earlier, he served on multiple National Research Council Committees including Future Workforce for Geospatial Intelligence (2011), Mapping Sciences (2004-2009) and Priorities for GEOINT Research (2004-2005). He also served as a general co-chair for the International Symposium on Spatial and Temporal Databases (2011) and ACM Geographic Information Systems (1996). He also served on the Board of Directory of University Consortium on GIS (2003-2004), as well as the editorial boards of IEEE Transactions on Knowledge and Data Engineering and IEEE-CS Computer Science and Engineering Practice Board.

In the early 1990s, Shekhar’s research developed core technologies behind in-vehicle navigation devices as well as web-based routing services, which revolutionized outdoor navigation in urban environments in the last decade. His recent research results played a critical role in evacuation route planning for homeland security and received multiple recognitions including the CTS Partnership Award for significant impact on transportation. He pioneered the research area of spatial data mining via pattern families (e.g., collocation, mixed-drive co-occurrence, cascade). Shekhar received a Ph.D. degree in Computer Science from the University of California, Berkeley.