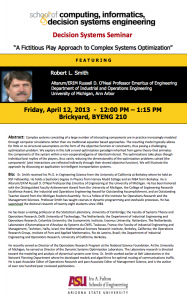 Abstract
Complex systems consisting of a large number of interacting components are in practice increasingly modeled through computer simulations rather than via traditional equation based approaches. The resulting model typically allows for little or no structural assumptions on the form of the objective function or constraints, thus posing a challenging optimization problem. We explore in this talk a novel optimization paradigm inherited from game theory that animates the components of the system within a noncooperative game of identical interest. The optimizations take place though individual best replies of the players, thus vastly reducing the dimensionality of the optimization problems solved (the components’ joint interactions are reflected indirectly through their shared objective function). We will illustrate the approach by discussing an application to intelligent transportation systems.

Bio
Robert L. Smith received his Ph.D. in engineering science from the University of California at Berkeley where he held an NSF Fellowship. He holds a bachelor’s degree in physics from Harvey Mudd College and an MBA from Berkeley. He is Altarum/ERIM Russell D. O’Neal Professorship Emeritus of Engineering at the University of Michigan. He has been honored with the Distinguished Faculty Achievement Award from the University of Michigan, the College of Engineering Research Excellence Award, the Industrial and Operations Engineering Award for Outstanding Accomplishment, and an Outstanding Teacher Award from the Michigan Student Assembly. He is a Fellow of the Institute for Operations Research and the Management Sciences. Smith has taught courses in dynamic programming and stochastic processes. He has supervised the doctoral research of 28 students since 1984.

He recently served as Director of the Operations Research Program at the National Science Foundation. At the University of Michigan, he served as Director of the Dynamic Systems Optimization Laboratory. The Laboratory research is directed toward the modeling and analysis of dynamical systems over time. Smith worked earlier at Bell Laboratories in the Network Planning Department where he developed models and algorithms for optimal routing of communications traffic. He is past Associate Editor of Operations Research and past Associate Editor of Management Science, and is the author of over 100 peer reviewed publications.