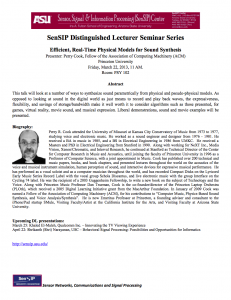 Abstract
This talk will look at a number of ways to synthesize sound parametrically from physical and pseudo-physical models. This lecture will present algorithms that can be considered for games, virtual reality, movie sound and musical expression. As opposed to looking at sound in the digital world as just means to record and play back waves, these algorithms address the expressiveness, flexibility and savings of storage/bandwidth. Liberal demonstrations, sound and movie examples will be presented.

Biography
Perry R. Cook attended the University of Missouri at Kansas City Conservatory of Music from 1973 to 1977, studying voice and electronic music. He worked as a sound engineer and designer from 1976 – 1981. He received a B.A. in music in 1985, and a B.S. in electrical engineering in 1986 from UMKC.  He received a master’s and Ph.D. in electrical engineering from Stanford in 1990.  Along with working for NeXT Inc., Media Vision, Xenon/Chromatic and Interval Research, he continued at Stanford as technical director of the Center for Computer Research in Music and Acoustics, until joining the faculty of Princeton University in 1996 as a professor of computer science, with a joint appointment in music. Cook has published over 200 technical and music papers, books and book chapters, and presented lectures throughout the world on the acoustics of the voice and musical instrument simulation, human perception of sound and interactive devices for expressive musical performance.  He has performed as a vocal soloist and as a computer musician throughout the world, and has recorded compact discs on the Lyricord Early Music Series Record Label with the vocal group Schola Discantus, and live electronic music with the group Interface on the Cycling 74 label. He was the recipient of a 2003 Guggenheim Fellowship, to write a new book on the subject of technology and the voice. Along with Princeton Music Professor Dan Trueman, Cook is the co-founder/director of the Princeton Laptop Orchestra (PLOrk), which received a 2005 Digital Learning Initiative grant from the MacArthur Foundation. In January 2009, Cook was named a Fellow of the Association of Computing Machinery (ACM), for his contributions to “Computer Music, Physics-Based Sound Synthesis, and Voice Analysis/Synthesis”.  He is now emeritus professor at Princeton, a founding advisor and consultant to the iPhone/Pad startup SMule, visiting faculty/artist at the California Institute for the Arts and visiting faculty at Arizona State University.

Save the date for these upcoming Distinguished Lecturer presentations