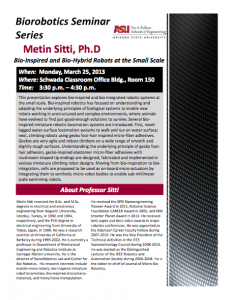 bio
Metin Sitti received B.Sc. and M.Sc. degrees in electrical and electronics engineering from Bogazici University, Istanbul, Turkey, in 1992 and 1994,  respectively, and the Ph.D. degree in  electrical engineering from University of  Tokyo, Japan, in 1999. He was a research  scientist at University of California at  Berkeley during 1999-2002. He is currently a  professor in Department of Mechanical  Engineering and Robotics Institute at  Carnegie Mellon University. He is the  director of NanoRobotics Lab and Center for  Bio Robotics. His research interests include mobile micro robots, bio inspired miniature robot locomotion, bio inspired micro/nano  materials and micro/nano manipulation.

He received the SPIE Nanoengineering Pioneer Award in 2011, National Science  Foundation CAREER Award in 2005 and IBM  Smarter Planet Award in 2012. He received  best paper and best video awards in major  robotics conferences. He was appointed as the Adamson Career Faculty Fellow during  2007-2010. He was the vice president of the  Technical Activities in the IEEE  Nanotechnology Council during 2008-2010. He was elected as the Distinguished  Lecturer of the IEEE Robotics and  Automation Society during 2006-2008. He is  the editor in chief of Journal of Micro Bio  Robotics.