Members of ASU’s 2013 Concrete Canoe team recently created the canoe that will compete in the upcoming Pacific Southwest Conference (PSWC), an annual event sponsored by the American Society of Civil Engineers (ASCE). You’ll have the opportunity to talk to members of the team at the Engineering Open House on Saturday, March 2, to learn more about how they make concrete float.

While the assembly for the new canoe took over four hours, you can get a quick look in under two minutes (video by Peter Van Dkyke):

At PWSC, the ASU team will go head-to-head with 18 other student chapters throughout Arizona, Southern California, Southern Nevada and Hawaii. The top team will go on to the national competition held in June at the University of Illinois at Urbana-Champaign.

“A lot of people have put in hours of time to make this successful,” says John Barfoot, team captain. “We have a very strong team this year. People come to every event and our captains are dedicated to their section of the canoe.” 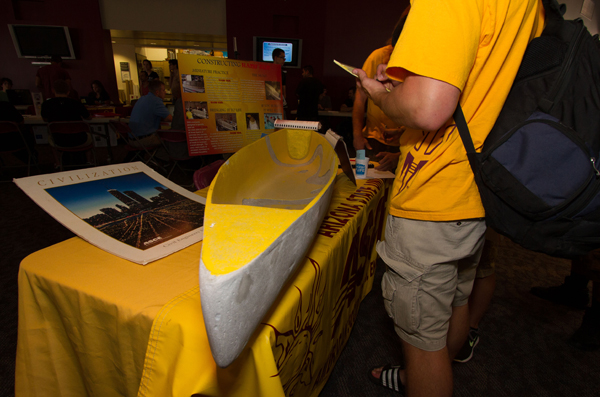 Beyond aesthetics, the team has put in a lot of work designing the mold using computer models and determining the best mix to create a strong, lightweight concrete.

“Over the last several years, we have tried hundreds of combinations to get the right mix design. This mix has great tensile strength,” Barfoot says.

The canoe walls are about one-half inch thick and it weighs approximately 300 pounds—about the same as a wooden canoe.

At the event, the team will present their project and be judged on both the technical design and project management. Barfoot says that the best part is the race where the Paddle Team will get the chance to show how well their design performs.

For Barfoot, this is more than a competition. He and Erick Ponce, a fellow student in the civil, environmental and sustainable engineering program, are presenting the concrete canoe project as their senior capstone.

Barfoot also notes that the team has received strong support from the Dean’s Office, private funding and donations—helping to offset the nearly $10,000 that it takes to cover supplies and travel.

PWSC will be held at the University of Southern California, April 4-6, 2013.