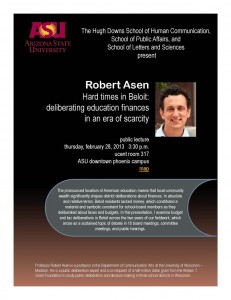 Hard times in Beloit: Deliberating educational finances in an era of scarcity
with Robert Asen, University of Wisconsin-Madison

The pronounced localism of American education means that local community wealth significantly shapes district deliberations about finances. In absolute and relative terms, Beloit residents lacked money, which constituted a material and symbolic constraint for school-board members as they deliberated about taxes and budgets. In this presentation, Asen examines budget and tax deliberations in Beloit across the two years of fieldwork, which arose as a sustained topic of debate in 18 board meetings, committee meetings and public hearings.

Robert Asen is a professor in the Department of Communication Arts at the University of Wisconsin-Madison. He is a public deliberation expert and a co-recipient of a half-million dollar grant from the William T. Grant Foundation to study public deliberation and decision-making in three school districts in Wisconsin.