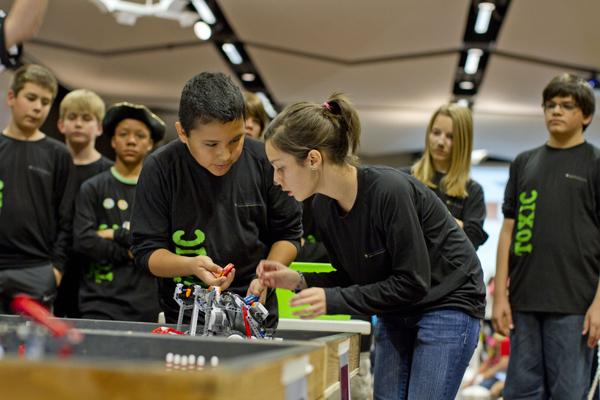 Team TOXIC, a team of middle school students from the Sonoran Science Academy in Tucson, has been named a finalist in the 2013 Edison Awards for their Non-Toxic by TOXIC innovation developed through the Arizona FIRST LEGO League (FLL) robotics program.

The Edison Awards is a program of Edison Universe, a not-for-profit organization that is focused on fostering innovation to create a positive impact on the world. This prestigious accolade honors excellence in new product and service development, marketing, human-centered design and innovation. The awards celebrate the innovators as much as the innovations.

Team TOXIC’s winning research project involved an examination of the potential health impact of the waxes that are applied to fruits and vegetables to preserve them after harvesting. Through their research, the team developed Non-Toxic by TOXIC, which removes the bacteria and wax from fruits and vegetables better than traditional household food cleaning products.

This is not the first win for Team TOXIC. The team took first prize at the 2011 FLL State Championship tournament at Arizona State University and went on to compete in the FLL World Festival, where they took first place in the research category.

The team will be honored at the Edison Awards Ceremony and Gala in April in Chicago, Ill., where winners will be announced. Past winners have included SpaceX for the Falcon 9 rocket and Dragon spacecraft, Ford Motor Company for the 2012 Ford Focus Electric and Dow Chemical Company for the DOW POWERHOUSETM Solar Shingles.

For more on the Edison Awards, visit www.edisonawards.com.

View the team’s presentation at the FLL World Festival.

Read more in the Full Circle article on the FLL World Festival.