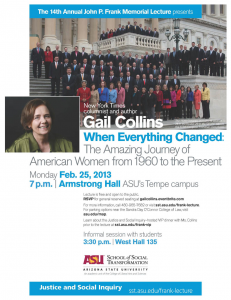 The 14th annual John P. Frank Memorial Lecture at ASU features New York Times columnist and author Gail Collins in a lecture titled “When Everything Changed: The Amazing Journey of American Women from 1960 to the Present.” The lecture is free and open to the public, but seating is limited. Register online for general reserved seating.

Gail Collins joined The New York Times in 1995 as a member of the editorial board and later as an Op-Ed columnist. In 2001 she became the first woman ever appointed editor of the Times’s editorial page. At the beginning of 2007, she stepped down and began a leave in order to finish her new book: “When Everything Changed: The Amazing Journey of American Women from 1960 to the Present” (Little and Brown, 2009). She returned to The Times as a columnist in July 2007.

Before joining the Times, Ms. Collins was a columnist at New York Newsday and the New York Daily News, and a reporter for United Press International. Her first jobs in journalism were in Connecticut, where she founded the Connecticut State News Bureau, which provided coverage of the state capitol and Connecticut politics. When she sold it in 1977, the CSNB was the largest news service of its kind in the country, with more than 30 weekly and daily newspaper chains.

Ms. Collins’ most recent book is “As Texas Goes: How the Lone Star State Hijacked the American Agenda,” published in 2012 by W.W. Norton. She is also the author of “America’s Women,” “Scorpion Tongues: Gossip, Celebrity and American Politics,” a biography of William Henry Harrison, and “The Millennium Book,” which she co-authored with her husband, Dan Collins.

One of ASU’s signature annual events, this series honors the memory of lawyer John P. Frank (1917 – 2002). Frank is recognized as part of the team that represented Ernesto Miranda before the U.S. Supreme Court in 1966. He wrote or delivered arguments for numerous First Amendment and desegregation cases and made important contributions to the historical brief for Brown v. Board of Education. He is remembered as well for his expertise in civil procedure and standards for judicial disqualification. A constitutional scholar, historian, author and mentor, his opinion was sought by presidents and Supreme Court justices and he was influential in shaping public policy in Arizona and the nation.

SEATING
The lecture is free and open to the public. Seating is open, but limited. Register online for your general reserved admission ticket. The lecture will be in the Great Hall of Armstrong Hall, Room 113.

Gifts to the John P. Frank Endowment of $1,000 or more allow the donor and a guest to enjoy a VIP dinner with Ms. Collins preceding the lecture as well as reserved seating. For more information, visit sst.asu.edu/frank-lecture or call the School of Social Transformation at 480-965-7682.