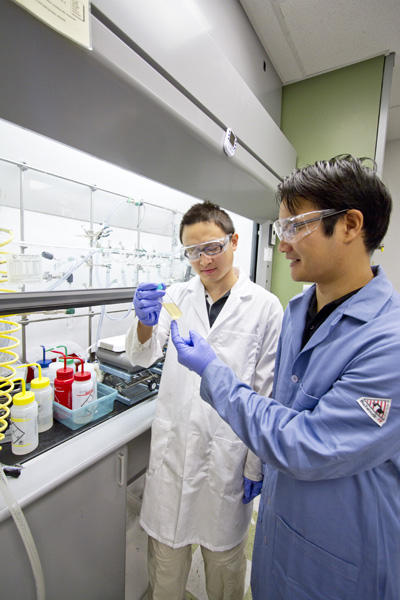 Robert Wang joined the School for Engineering of Matter, Transport and Energy as an assistant professor in 2011 and now directs the Thermal Energy and Nanomaterials Laboratory. His research focuses on manipulating nanomaterials for thermal energy applications such as thermoelectric power generation, latent heat storage and thermal management. To advance these fields, Wang and his students conduct work throughout several phases of the research pipeline generally starting with nanomaterials synthesis, followed by property measurements and ending with device fabrication.

Thermoelectric power generators, which are solid-state devices that directly convert heat into electricity, are one topic that Wang’s group studies. These devices have been used to supply power in many demanding applications such as the Mars Science Laboratory (i.e., the Mars rover, Curiosity) and the Voyager space probes. Wang believes thermoelectric devices hold promise well beyond these niche applications, one example being waste-heat recovery.

“We generate a ton of waste heat,” he says. “Consider a car for instance, it takes in outside air, heats it up then sends it back out the tailpipe. What if we could convert exhaust heat into electricity just like a hybrid automobile converts braking power into electricity?”

Wang’s group is exploring the use of solution-phase chemistry for low-cost materials production and the use of nanoparticle inclusions in semiconductor matrices for improved thermoelectric efficiency.

Wang’s group is also exploring thermal energy storage as a means to address both energy generation and energy consumption.

On the energy consumption side, thermal storage can significantly impact the thermal management of buildings. A thermal storage system can use the daytime warmth for nighttime heating and the nighttime cold for daytime cooling. This has a huge potential because heating, ventilation and air conditioning accounts for 40 percent of energy use in buildings (and buildings account for 41 percent of primary energy consumption in the United States).

To achieve this, Wang’s group is looking at using nanocomposites for phase-change thermal storage. Phase change is immensely effective at storing thermal energy. For example, the thermal energy stored in the solid-liquid phase transition of water is enough to heat an equivalent amount of water by 80°C. However, one drawback of using phase change is that melting temperature is generally an inflexible parameter. Wang believes this hurdle can be addressed by using nanomaterals, for which the melting temperature can be size-dependent. This imparts phase change flexibility and the creation of designer thermal storage materials.