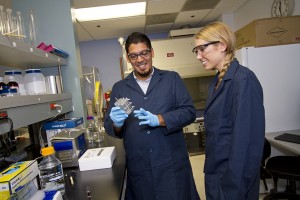 César Torres, assistant professor in the School for Engineering of Matter, Transport and Energy, is working on fundamental advances in microbial fuel cell (MFC) research that will help put this innovative and relatively new technology on a path to commercialization.

“Certain bacteria are capable of directly generating an electric current from organic compounds,” explains Torres. His research is aimed at maximizing and capturing that energy.

The results could help solve two problems: getting rid of organic waste and providing clean energy. Wastewater plants could become energy neutral if not energy positive.

Torres says that one of the hurdles is efficiency. He is working with anode-respiring bacteria (ARB) in an effort to find and solve the problems limiting the electrical output.

Bacteria generally work at ambient temperatures. Torres is studying bacteria that can grow at a higher temperature (up to 65 degrees Celsius) and bacteria that degrade cellulose and produce electrical current more quickly and efficiently.

Torres, who earned his doctorate at ASU in 2009, is a leader in microbial electrochemical cell research. He has published dozens of articles in peer-reviewed journals on ARB.

Torres’ work is funded by the Department of Defense, Office of Naval Research and National Science Foundation. He is also working with industry partners.

Applications for MFC’s offer promise in the development of renewable, readily available fuel for military bases or other remote locations. Torres cites the difficulties with battery power needed deep in the ocean.

“Typical batteries produce chemical waste,” he says. “Instead, we can use sediments found at the bottom of the ocean which have organic matter to produce the energy needed in an environmentally friendly manner.”

In another project, his team is working to turn food and beverage waste into hydrogen.

Several students—from undergraduate to doctoral—work in the lab with Torres.