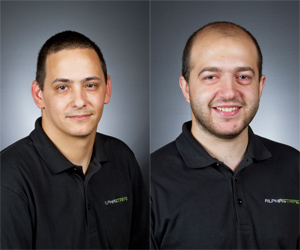 A social media tool will soon be launched to connect families, friends and members of the public to the unique experiences of soldiers as they live their lives during and after times of extreme conflict.

AlphaStripe is an entrepreneurial venture started by a mechanical engineering graduate student, Eli Chmouni, in the School for Engineering of Matter, Transport and Energy, one of the Ira A. Fulton Schools of Engineering at Arizona State University. Chmouni and fellow team member Pete Chinnici, submitted their project to the Edson Student Entrepreneur Initiative of 2012-2013 and were selected as winners.

AlphaStripe is one of 20 companies to receive funding, a year’s worth of office space in the SkySong facility and an intensive, mentor-led acceleration program though the Edson program. “The money is just a piece of it, but the connections and mentorship they put you in touch with is amazing,” says Chmouni.

Mentorship is a large benefit for AlphaStripe, as they are an entrepreneurial group that started independently from the organized venture programs at ASU. According to Chmouni, “If you start outside of the ASU resources, there is no way to reach the companies and people that we are put in touch with through Edson.”

The goal of AlphaStripe is to create a web platform where people can tell their personal stories about conflict either in photos, video or text. It brings together civilians, families, friends and soldiers who have experienced conflict directly or indirectly, and allows them to document and share their stories with the rest of the world.

“A lot of people have stories,” says Chmouni, “My family lived through the civil war in Lebanon and they used to share stories with me about it.” His family came to America six years ago as religious refugees. Fellow AlphaStripe member, Chinnici, served two deployments in Iraq and experienced Post-Traumatic Stress Disorder upon returning home.

Their unique experiences with conflict brought about the idea of creating AlphaStripe to record history in a more intimate and realistic way. “Sure, you can have a chapter in a book, but you will never have the experience from the people who were there,” explains Chmouni. “Imagine being able to get the firsthand accounts of soldiers who were there.”

Chmouni and Chinnici first began working together when a media-production venture of Chmouni’s, BlueDream, merged with Chinnici’s printing business to produce a successful company. Once Chmouni learned of Chinnici’s experience in Iraq he recruited him into the AlphaStripe team.

The first pilot launch of AlphaStripe was on Memorial Day of this year. It was intended to be a small test of public response to gather feedback for the actual launch in October 2012. As soon as the pilot test launched, the media picked up the story and news spread about the new platform.

Local television stations, Yahoo! news and several investors contacted the team, looking to learn more about their project. “Our second beta test was on the Fourth of July, and right now we are seeing what features people like in preparation for our launch,” says Chmouni.

The public and media support of their project is proof of the need for such a product. With the team’s dedication and the resources gained for the Edson program, AlphaStripe will provide the answer to a long overlooked issue.