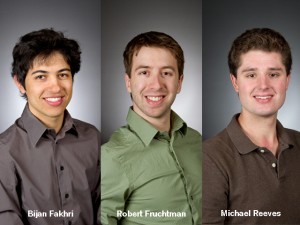 A recent Arizona State University engineering graduate and three current engineering students spent the past summer as interns at one of the United States’ most prominent national research centers.

The U.S. Department of Energy laboratories (including a facility in California) focus on national defense projects applying science and engineering to support homeland security, counterterrorism and military operations, as well as security-related energy and climate research.

“Sandia’s work covers almost every area of engineering,” says Fruchtman, who also was an intern at Sandia in the summer of 2011. “They tackle really big problems, and you are surrounded by a lot of really smart people. So it’s a great experience.”

Fruchtman graduated from ASU in May after majoring in computer science in the School of Computing, Informatics, and Decision Systems Engineering, one of ASU’s Ira A. Fulton Schools of Engineering. He was also a student in ASU’s Barrett, The Honors College. He’s now pursuing a master’s degree in computer science at Purdue University.

At Sandia, the graduate of University High School in Tucson had opportunities to apply his education by assisting in projects involving technology used to process and analyze data provided by satellite observations.

Reeves, a graduate of Mountain View High School in Mesa and now a senior majoring in computer systems engineering with a minor in mathematics, also helped on satellite technology projects.

In addition, he worked on developing prototypes for improved computer software for use in a variety of security and defense operations.

“It was a great opportunity to apply what you’re learning in classes, and you learn a lot of new things,” he says.

“The Sandia people were great to work for,” Reeves says, “and I met a lot of computer science and computer engineering students from all over the world who were great to with. It was an all-around good summer.”

Reeves plans to apply to do an internship at Sandia again next summer.

Chen, a graduate of Desert Vista High School in Ahwatukee, helped with designing a system debugger for the Android smartphone platform, and piloting a Department of Homeland Security competition to develop secure voting machines.

“It was fun because it was very much a teamwork-oriented environment,” Fakhri says. “You could ask a question out loud in a room and soon there would be three people at your desk arguing about the best way to solve a problem.”

He expects some of what he learned at Sandia to be useful in his student researcher role with ASU’s Center for Cognitive Ubiquitous Computing (CUbiC), which focuses on design of devices to assist people living with perceptual or cognitive challenges. Fakhri is helping develop wireless devices to help stroke survivors regain motor control.

Chen will apply his Sandia experience to his work at ASU assisting faculty members with research in computer security and development of a mini-submersible device for exploring a lake in Antarctica.

Fakhri summed up what his fellow engineering students agree was the most valuable lesson gained from their Sandia internships: “I learned that I don’t know nearly as much as I thought I did.”