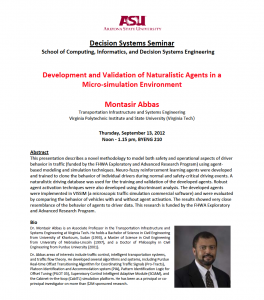 Join the School of Computing, Informatics, and Decisions Systems Engineering for a Decision Systems seminar:

Abstract
This presentation describes a novel methodology to model both safety and operational aspects of driver behavior in traffic (funded by the FHWA Exploratory and Advanced Research Program) using agent-based modeling and simulation techniques. Neuro-fuzzy reinforcement learning agents were developed and trained to clone the behavior of individual drivers during normal and safety-critical driving events. A naturalistic driving database was used for the training and validation of the developed agents. Robust agent activation techniques were also developed using discriminant analysis. The developed agents were implemented in VISSIM (a microscopic traffic simulation commercial software) and were evaluated by comparing the behavior of vehicles with and without agent activation. The results showed very close resemblance of the behavior of agents to driver data. This research is funded by the FHWA Exploratory and Advanced Research Program.