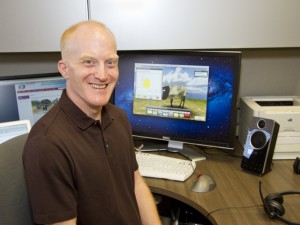 Brian Nelson says that learning in a typical classroom is nothing like learning in the real world. Nelson, an associate professor in the School of Computing, Informatics, and Decision Systems Engineering, is developing computer-based learning environments designed to immerse students in contextualized simulations of real-world activities to introduce them to scientific inquiry and content.

Nelson’s work in this area began with the River City Virtual World project at Harvard, where he earned a doctorate in education. Students enter a video game-like environment tasked with bringing their modern-day knowledge to help a 19th century town understand why residents are becoming ill.

Working in small teams, students go through the scientific inquiry process, talking to townspeople and scientists, running experiments and tracking clues. The teams form hypotheses, collect more data, and then test their hypotheses. Similar to real world science, researchers on the study found that different teams would come up with different ideas about the problems facing the city.

“The project was a good example of developing situated curriculum, and showed that virtual worlds can help kids learn and be engaged by science inquiry. However, the project’s assessment methods were fairly traditional. While kids explored virtual worlds as part of their learning, they were tested mainly using paper-based pre and post-tests,” Nelson says.

In a current NSF-funded study, SAVE Science (Situated Assessment in Virtual Environments for Science Content and Inquiry), Nelson is exploring ways to design and embed assessments into virtual worlds and find new ways to analyze the data.

Nelson’s first game in the project, Sheep Trouble, tests students on their understanding of how organisms adapt over time to a specific physical environment. In Sheep Trouble, students go to a farm where the farmer has recently brought new sheep from a remote island and added them to his herd. The new sheep have physical characteristics that cause them problems in their new environment. The local villagers think the sheep are afflicted with black magic and must be killed. The students have to find out what the problems are.

As part of the study, Nelson and his colleagues at the University of Maryland and Temple University look for connections between student results on standardized testing and the embedded assessments in SAVE Science.

“If there is little overlap, we want to know what that means,” Nelson says. “Can we get more interesting data about learning from these kinds of embedded assessments? What patterns of interactions could serve as a substitute for regular testing?”

Now on year four of the project, Nelson has added virtual world-based tests aimed at weather and climate, physics and air pressure.

He has expanded his work on assessments, teaming with researchers at the University of Maryland in data mining and analysis. In the Sheep Trouble module, they found that some kids who demonstrated an understanding that different physical attributes were impacting the health of the new sheep, did not understand why this occurs. They also found that most students began the assessment by exploring the virtual farm randomly, but those that came into the test with an understanding of the concepts being tested narrowed down their investigation to relevant information sources much more quickly.

Nelson has several ASU PhD students working with him. Their research includes student personalization of characters within a virtual environment and how that impacts motivation. Another project involves finding ways to focus a student’s attention on objects in a virtual world through the use of visual cues.

“This area is often described as gaming, but it goes beyond that — there is great potential in many kinds of immersive learning environments,” Nelson says.

Nelson has published and presented extensively on the viability of educational virtual environments for situated inquiry learning and assessment. In addition to the River City and SAVE Science programs, Nelson has been co-principal investigator on the NSF-funded SURGE study, an online game to teach physics, and on two MacArthur Foundation grants: 21st Century Assessment, investigating new models for assessment in digital media-based learning environments, and Our Courts, creating and assessing an immersive game to promote civic engagement.

Nelson hopes that by better understanding how students learn we can design more effective teaching methods and immersive environments in the future.