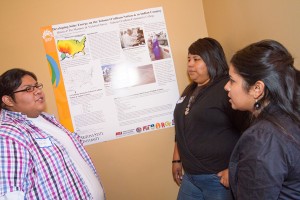 When they first arrived at Arizona State University, Hilario Pio-Martinez and Victoria Chavez, two students from the Tohono O’odham Community College, felt intimidated. Neither is an engineer and they were embarking on a five-week, intensive photovoltaic technology research program as part of the Research Experience for Undergraduates through the Quantum Energy and Sustainable Solar Technologies Engineering Research Center.

“In the first week, we made a solar cell,” says Chavez, “It was really cool.” They joined about twenty undergraduate students from universities across the country for a unique experience to participate in real-world research, learning more about manufacturing solar cells on ASU’s industrial-scale pilot line in the Solar Power Lab.

Led by ASU electrical engineering graduate students Guy Pickett and Tim Reblitz, students worked in teams on one aspect each week—learning the fabrication and analysis of technologies on commercial equipment. Teams were tasked with increasing cell efficiency by one to two percentage points.

Pio-Martinez notes his favorite part of creating a solar cell was the backside oxide etching process. “This was the best five weeks,” Pio-Martinez says.

Pio-Martinez and Chavez found the focus for their final presentation when education director, Jenefer Husman, guided the pair to a sustainability project focused on solar energy on their own tribal lands.

The two students focused their energy on learning how the solar cells work and designing a customized efficient cell for the location. Pio-Martinez says one of the most interesting things that he learned is the planning process. “I have a much better understanding of the challenges that manufacturers face from budgeting that puts the whole plan in motion, to researching the climate and region to assess the most resourceful use of solar technology.”

They also considered the best way to encourage a cultural embrace of the technology.

Both note the unique challenges faced in solar development on tribal land. “Education is a factor, so is language,” says Chavez. For example, there is no translation for “solar energy” making it challenging to explain to people in their community who do not speak English.

As part of their research project, the two identified ways that they might mitigate these barriers. They came in knowing little about solar energy, but with their experiences from QESST, both Pio-Martinez and Chavez are now preparing to return to their community and share what they have learned.

Their community is in southeastern Arizona and northwest Mexico. Pio-Martinez and Chavez say the land selected for the solar power site has the “highest density radiation, ideal for solar.” They are planning on educating members of their community about solar energy and the benefits their particular location holds due to this high radiation.

At the culmination of the five-week program, all teams presented research posters and answered questions from faculty, staff and other students. Chavez and Pio-Martinez also produced four final solar cells of their own design in the Solar Power Lab. They plan to keep one each, and give one to the college and one to the district to promote renewable energy.

More on the REU program: http://qesst.asu.edu/education-and-outreach/reu