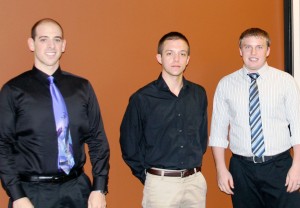 A design by a team of Arizona State University engineering majors for a device that detects upcoming advertisements on television and videos – and can then automatically switch during commercial breaks to other programming selected by viewers – was successfully debuted at a recent international student technology design competition.

Team AdSkip entered its device design and prototype in the Intel Cup Embedded Systems Design Contest hosted in late July by Shanghai Jiao Tong University in Shanghai, China. The competition drew entries from about 160 student teams from 12 countries. AdSkip was the sole entry from a U.S. team.

“AdSkip enhances the viewer’s television-watching experience,” says Thau of the system the team designed to analyze video signals to reveal when advertisements are about to interrupt featured programming.

“By detecting commercials, the device can offer the viewer some kind of secondary content during the commercial break, such as another show, or Internet content, until the show they were watching returns,” Thau explains.

Unlike conventional DVR or TiVo devices that must record programs to skip past advertisements, AdSkip can work in real-time, he says.

The team developed AdSkip using the latest embedded computer processor and Field Programmable Gate Array technologies, which Intel Corp. provided to all Intel Cup competitors. Students were given three months to use the technologies to design devices with practical applications.

“I found the technological challenge intriguing and liked that the contest was sponsored by Intel,” Thau says. “Its role in the project made the experience professional and realistic, similar to what I expect it would be like in a real-world situation.”

“It was a great opportunity to work with cutting-edge technology and participate in an international event,” team member McBride adds. “It was fun to imagine a new product, create it, and see it work.”

The students carried out their project with mentoring from lecturer Yinong Chen and adjunct instructor Kyle Gilsdorf in the School of Computing, Informatics, and Decision Systems Engineering, one of ASU’s Ira A. Fulton Schools of Engineering.

“Placing so well at an international competition reflects highly on the engineering education at ASU and the faculty members who helped us,” McBride says. “We could not have done this without their help. They sacrificed much of their time to mentor and guide us.”

Parenteau represented the team in presenting and demonstrating the AdSkip project during the competition. The device passed the proof-of-concept test – meaning the team’s work demonstrated the technical feasibility of producing a device capable of processing a real-time video feed and detecting commercial breaks. There’s still a big step needed to bring the project to fruition.

“We have not yet developed an exact application of how the device would be used,” Thau says. “We have to focus on how exactly it would be used in a typical scenario of a viewer watching TV.”

The Intel Cup Embedded Systems Design Competition evaluation process “is rigorous and intense,” says Chen, who was judge in this year’s contest. “As the first team ever from ASU to participate, AdSkip has done a terrific job to win a second-place prize,” he says. “They had to compete with many teams from universities that have entered teams in the contest since it began in 2002.”

The competition is a biannual event established by the Chinese government and sponsored by Intel.

It’s an invitation-only competition for schools with programs in embedded systems – which are the various computer systems designed to control functions of other systems, from watches, mobile phones and digital recording players to automobiles, manufacturing systems and power plants.

The Ira A. Fulton Schools of Engineering is home to the Center for Embedded Systems, which is a designated National Science Foundation Industry/University Cooperative Research Center.